HALIFAX – Lawyers for Transport Canada are in a Halifax courtroom today challenging the certification of a class action lawsuit filed on behalf of the 133 passengers aboard an Air Canada jet that crashed at the Halifax airport in March 2015. 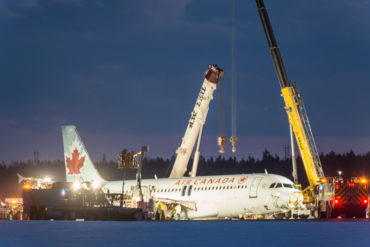 Workers use cranes March 31, 2015 to hoist an Air Canada Airbus A320 after it landed short of a runway at Halifax Stanfield International Airport, hitting power lines and an antenna.

As the Airbus 320 approached in gusty winds and heavy snowfall, it hit some power lines, slammed into the ground about 200 metres short of Runway 05 and bounced into the air, where it tore through a navigation antenna.

When the jet hit the ground a second time, about 70 metres before the runway threshold, one of its engines was torn off and it skidded along the runway for another 335 metres.

More than two dozen people were injured in the crash.

Lawyer Ray Wagner, who represents the plaintiffs, says Transport Canada is arguing that as a regulator it can’t be sued because it does not owe a duty of care to the passengers.

The other defendants in the case, including Airbus, Air Canada, the Halifax International Airport Authority and Nav Canada, confirmed today that they do not oppose the certification of the suit as a class action.