OTTAWA – Lawmakers delving into the Facebook data scandal are hearing experts call for substantial regulatory upgrades to protect the privacy of Canadians – as well as warn of democratic and economic risks posed by foreign companies motivated by “surveillance capitalism.”

Speaking today before a parliamentary committee, Jim Balsillie urged policy-makers to shield citizens by implementing strict data-privacy rules similar to those to be introduced later this month by the European Union. 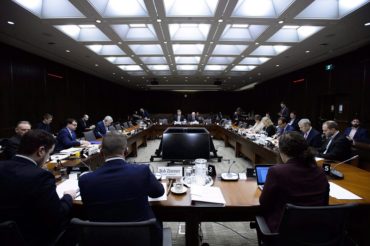 Jeff Silvester, back middle left, and Zackary Massingham, back middle right, of AggregateIQ appear as witnesses at the commons privacy and ethics committee in Ottawa on Tuesday, April 24, 2018. The committee is looking into the breach of personal information involving Cambridge Analytica and Facebook. THE CANADIAN PRESS/Sean Kilpatrick

The former Research in Motion chairman and co-CEO says data-harvesting giants like Facebook and Google are entirely driven by mass surveillance and follow business models that are exploiting gaps in Canada’s governance laws.

Google Canada’s Colin McKay also testified by arguing his company has strengthened privacy and data-control tools for its users – and he insists the firm only sells advertisements based on the profiles and interests of its users, and not their data.

The committee also heard from U.K. information commissioner Elizabeth Denham, who recommended her Canadian counterpart be given more power to protect private online data from abuse, including when it is used by political parties.

The study follows a scandal that allegedly saw the personal information of some 87 million Facebook users – including more than 620,000 Canadians – improperly accessed for political purposes ahead of U.K.’s Brexit vote and the 2016 U.S. presidential election.