OTTAWA – Cooling inflation has given the Bank of Canada another reason to keep interest rates on ice next month.

The annual pace of inflation slowed in November to 1.7 per cent as upward pressure from higher gasoline prices eased off, Statistics Canada said in a report Wednesday.

The agency’s latest data point showed the weakest year-over-year pace of inflation since January 2018 in a reading far more sluggish than October’s level of 2.4 per cent. Inflation for September was 2.2 per cent. 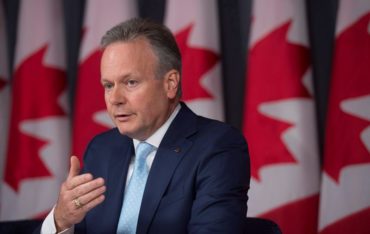 Many experts said the inflation results Wednesday reinforced predictions the Bank of Canada will be in no rush to raise its benchmark interest rate target at its next policy announcement on Jan. 9.

In fact, there are expectations the central bank could wait several months before its next move due to the combination of several recent economic developments.

“With some of the volatility we’ve seen in the financial markets and the lower oil prices’ impact on economic activity in Western Canada, the Bank of Canada can afford to be cautious and will be in no rush to their next rate hike,” said James Marple, senior economist for TD Bank.

The Bank of Canada, which can raise its trend-setting rate as a way to keep inflation from climbing too high, has introduced five hikes since the summer of 2017 in response to the stronger economy.

Marple said the central bank’s next increase might come in March – and that may only be if crude prices move back up, market volatility abates and trade fears surrounding the U.S.-China relationship start to subside.

“We only think they’ll go twice this year,” he said, referring to potential 2019 Bank of Canada rate hikes.

Statistics Canada said the recent drop in global oil prices translated into a 5.4 per cent price contraction at the gas pump in November, handing the gasoline category its first year-over-year decrease since June 2017.

Excluding gas, the inflation rate would have increased 1.9 per cent last month.

Leading up to the report, analysts had projected inflation to slow thanks to weeks of cheaper prices at the pump. Economists had expected a increase of 1.8 per cent, according to Thomson Reuters Eikon.

“Bad news for Alberta has been good news for Canadian consumers, as cheaper gasoline has brought inflation down to earth,” CIBC chief economist Avery Shenfeld wrote in a note to clients.

Prices softened in other areas as well. The cost of durable goods recoiled 0.1 per cent last month, following a 0.9 per cent expansion in October, as consumers paid less for furniture, tools and other household equipment compared with a year earlier.

The average of the agency’s three core inflation readings slowed slightly to 1.9 per cent last month, from two per cent in October.

All three core measures sat at 1.9 per cent – below the ideal two per cent target of the Bank of Canada. The core average has stayed close to the two per cent bull’s-eye in recent months and November’s reading is the first time it slowed to 1.9 per cent since June.

The Bank of Canada pays close attention to core inflation ahead of its rate decisions.

As governor Stephen Poloz weighs his next decision, experts expect him to remain focused on the recent plunge oil prices, the capacity of the energy sector to engage in business investment and the ability of Canadian households – many of which are saddled with very high levels of debt – to manage higher interest rates.

The bank must also consider another concern – a sharp deceleration in wage growth over the past six months. The national unemployment rate has been near a 40-year low for more than a year, but wage growth has cooled instead of picking up its pace in the tightened labour market.