VICTORIA – Vancouver is poised to join most major cities in Canada in offering ride-hailing services with the long-awaited approval Thursday of licences for companies Uber and Lyft to operate in British Columbia’s Lower Mainland and Whistler.

The independent Passenger Transportation Board said the next steps for Uber and Lyft before getting vehicles on the road involves securing proper insurance and working with the municipalities in the approved operating areas to ensure bylaw compliance. 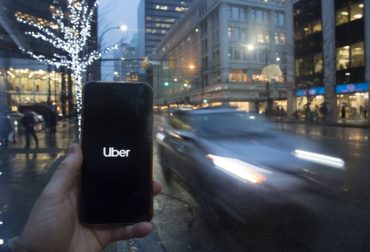 The Uber App is pictured on a smartphone in downtown Vancouver, B.C., Monday, December 30, 2019. British Columbia’s Passenger Transportation Board has granted long-awaited licensing approvals to ride-hailing companies Uber and Lyft for service in the Lower Mainland and Whistler. THE CANADIAN PRESS/Jonathan Hayward

The Crown-owned Insurance Corporation of B.C. said in a statement that once ride-hailing companies provide confirmation of their approval from the transportation board, they can immediately buy insurance.

Vancouver Mayor Kennedy Stewart said city staff worked quickly Thursday and were able to issue Uber and Lyft ride-hailing business licences shortly after the approvals by the transportation board.

“I’m very pleased to announce that ride-hailing is finally coming to Vancouver,” the mayor said in a statement. “We’ve been working hard to prepare for this, and staff have turned around business licences for Uber and Lyft on the same day they were issued by the province.”

Transportation Minister Claire Trevena said the wait for ride-hailing service in B.C. has been lengthy and frustrating but will be worth it.

Premier John Horgan and Trevena said ride-hailing would be running in the province by the end of last year, but by December the board had approved just one company to operate in the resort community of Tofino and the Whistler area.

“I know people are frustrated,” Trevena said at a news conference at the legislature. “I know people wanted it immediately. I was as frustrated as everyone in the time it seemed to be taking. But I think in the end people in B.C. can feel very comfortable in the service they’ll be getting.”

“Once those are approved, we plan to announce our initial operating area, give our inaugural ride and launch our service,” he said.

Lukomskyj said the company is accepting applications for drivers and has agreements with driving schools to help prospective operators obtain their Class 4 commercial driver’s licence, a requirement in B.C. for transportation network service drivers.

Michael van Hemmen, Uber’s spokesman in Western Canada, said in a statement the licence approval is a major step, but the company still needs to receive several administrative approvals before it hits the road.

“We hope to launch very soon, once we have obtained a business licence from the City of Vancouver and purchased insurance from the Insurance Corporation of B.C.,” he said.

Van Hemmen said drivers with Class 4 licences are encouraged to sign up for Uber.

Uber’s website states the company is operating in 19 locations in Canada and more than 700 cities globally. The San Francisco-based Lyft currently operates in nine locations in Ontario and about 560 cities and communities in the United States.

She said the process involved amending transportation service laws to accommodate ride-hailing and the existing taxi service and to ensure safety for passengers and drivers.

“I think people are aware we’ve been diligent in developing the framework and amending the legislation, getting the regulations in place, putting passenger safety first,” Trevena said.

She said it’s now up to the companies to get the necessary approvals before providing service to passengers.

“As quickly as they can go through these steps, they’ll be operating,” Trevena said.

B.C. Taxi Association cautioned the government against allowing the service, saying taxis couldn’t compete on a level playing field because their drivers wouldn’t have open access to all of Metro Vancouver and ride-hail operators can undercut their prices, which taxis can’t do.

Association president Mohan Kang said in a statement that its lawyers will review the two licence approvals and “we will be meeting with them in due course to consider their recommendations and to decide a go-forward plan for the BCTA.”

He said the taxi association is not opposed to ride hailing, but wants a system that does not put taxi services at a disadvantage.

The board said it has received 29 ride-hailing licence applications and has issued six decisions so far.

This report by The Canadian Press was first published Jan. 23, 2020.


Related
Nearly half of people in Toronto and Montreal favourable to Uber, new poll finds
Ride-hailing on its way to B.C.
Insurance available for ride hailing July 16 in B.C.
How Aviva will cover Lyft in Canada