What the latest distracted driving numbers from Desjardins mean

More than half (53%) of respondents to a survey admit to having driven distracted by their cellphones at least once, up from 38% last year, Desjardins General Insurance Group said Tuesday in a release.

“Canadians seem to believe the problem lies with other drivers. Ninety-three percent of drivers think they rarely or never drive distracted by a cellphone, but at the same time, 84% claim they often or always see others driving distracted by cellphones,” DGIG said. 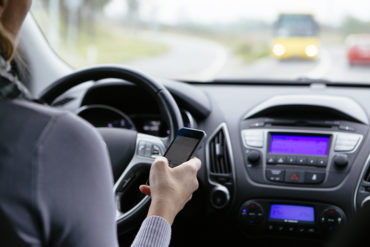 In Ontario, it is against the law to physically touch a cellphone while driving.

Police have unmarked commercial vehicles with an officer in the passenger seat who can see into the compartment of a vehicle, and who can call another officer in a different car to pull an offender over, Ontario Provincial Police Sergeant Gord Keen said during a recent industry conference.

“We can pan 360 degrees. We can scan into vehicles and see what people are doing,” said Keen.

“We are using fixed wing aircraft and helicopters. It’s not hard to figure out who the distracted drivers are when you are viewing them going down the road from the air. Their speeds are constantly changing. They look like an impaired driver,” Keen said Aug. 22 during a panel discussion at Symposium West, produced by the Insurance Institute of Canada.

Five years ago, the minimum fine for distracted driving in Ontario was $60 while the maximum fine was $500.  Those fines were increased in 2015 and then increased a second time effective Jan. 1, 2019.

In Saskatchewan, the penalty for a second offence is vehicle impoundment for seven days, Saskatchewan Government Insurance told Canadian Underwriter earlier. SGI has the power to impose penalties – above and beyond provincial fines – for driving offences.

Effective Jan. 1 in Ontario, the minimum fine for a first offence is $500 and first-time offenders can face a three-day licence suspension. Distracted drivers who are caught a second time face a one-week licence suspension and repeat offenders with more than two distracted driving charges face 30-day suspensions of their driver’s licences. Maximum fines are now $1,000 for a first offence, $2,000 for a second offence and $3,000 for a third offence.

But those fines do not seem to be a deterrent, Keen said.

“The general population is not concerned about the ticket they get on the side of the road. What means something to them are points against the driver’s licence and how does this affect their insurance rates,” he said during Symposium West, held at the Cambridge office of the Ontario Mutual Insurance Association and Farm Mutual Re. “Sanctions should get harsh because this is an extremely high-risk behaviour.”

And it’s not just smartphones that are the problem.

DGIG said Sept. 24 that when respondents to its survey were asked about the factors that distract them while driving, nearly half (49%) said external surroundings, 45% said cellphone related distractions (including texting, calling and e-mailing) and 41% reported being distracted by changing the vehicle’s console/infotainment system.