When will ride-hailing arrive in British Columbia?

VICTORIA – Premier John Horgan says ride-hailing is on its way to British Columbia and if the service isn’t available by Christmas it shouldn’t be seen as a government failure.

The premier says the approval process to bring ride-hailing services to B.C. is well underway but it has been time consuming and taken longer than anticipated. 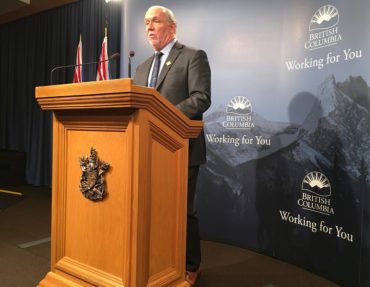 B.C. Premier John Horgan addresses a news conference at the B.C. legislature in Victoria, Thursday, Nov.28, 2019, where he discussed the most recent session of the legislature. Horgan says ride hailing is on it’s way to B.C., but he wouldn’t guarantee a Christmas arrival. THE CANADIAN PRESS/Dirk Meissner

Horgan says he prefers to see an orderly introduction to ride-hailing.

The premier and Transportation Minister Claire Trevena have consistently said ride-hailing will arrive in B.C. before the end of this year, but also have not ruled out a possible Christmas start.

Horgan says the Passenger Transportation Board is in the process of reviewing licence applications for 20 prospective ride-hailing companies wanting to operate in B.C.

On Thursday, Horgan was asked if not having the service in place by Christmas Eve would be considered a failure.

“I don’t think it’s a failure if we get to the end result,” he replied.

“I think we’re driving to get this done and I think people would prefer that we do it in the right way, protecting the rights of individuals, the rights of existing companies and making sure we protect the travelling public.”

She said the board knows the public is expecting the arrival of ride-hailing for the Christmas season and it is working to process licence approvals.