EDMONTON – A group tasked with cleaning up thousands of abandoned energy sites in Alberta says the province’s rules for ensuring polluters reclaim their wells before selling them off are inadequate.

The industry-funded Orphan Well Association made the criticism in a letter to Alberta’s energy regulator, which is considering a proposed transfer of hundreds of toxic gas wells, pipelines and other facilities from an energy giant to a much smaller company. 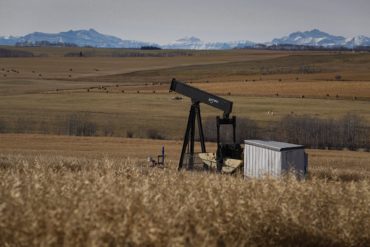 A de-commissioned pumpjack is shown at a well head on an oil and gas installation near Cremona, Alta., Saturday, Oct. 29, 2016. The group tasked with cleaning up Alberta’s thousands of abandoned energy facilities says the province’s rules for ensuring polluters clean up their wells before selling them off are “inadequate.” THE CANADIAN PRESS/Jeff McIntosh

“The (association) has seen a dramatic increase in the number of orphan properties over the last several years and we believe part of the issue stems from a historically inadequate assessment of the transfer risks,” says the Dec. 5 letter from association head Lars DePauw.

“The (association) believes that the current regulatory system for assessing the overall financial viability of asset transfers is not adequate and needs to be augmented.”

An Alberta Energy spokesman said the concerns are being addressed. Kavi Bal said new policies addressing the life cycle of energy wells are coming by April.

“These policies will ensure the cleanup of inactive wells is addressed by producers – not on the backs of taxpayers – while still ensuring an environment for industry to be successful,” Bal wrote in an email.

Shell Canada has agreed to sell 284 sour gas wells, 66 facilities and 82 pipelines in the southern Alberta foothills to a subsidiary of Pieridae Energy, a Calgary-based company with a market value less than the price of the assets and a stock price under $1.

The Alberta Energy Regulator must rule on the licence transfers at a time when the inventory of energy facilities abandoned by bankrupt companies has grown to 3,400.

Pieridae has said it will retain Shell employees who are expert in handling sour gas. It also said the transaction meets provincial rules that stipulate a purchaser’s assets must be at least twice its liabilities before licence transfers are approved.

He said Pieridae expects income to increase tenfold with the new acquisition and production to nearly triple.

Regan Boychuk of the Alberta Liabilities Disclosure Project, a group of academics and landowners who have filed concerns about the Pieridae transfer, said the regulator’s rules are not credible.

Assets are calculated on the basis of the average industry profit per barrel of oil. That figure – now $37 – hasn’t changed since 2010, when oil sold for about $100 a barrel.

That average is supposed to be recalculated every three years, said Boychuk.

“It is not a proper accounting of the cost of this type of work,” he said.

Concerns about the transfer are shared by at least two major energy companies.

“Material uncertainties exist around (Pieridae’s) ability to continue as a going concern,” said a letter from Cenovus to the energy regulator.

“If the licence transfers are allowed, there is a high probability that Pieridae will be unable to respond to circumstances should any operational, health, safety or environmental problems arise,” said Canadian Natural Resources.

Both companies said the association could get stuck with a $500-million bill if Pieridae is unable to clean up.

Bal said the policy update will deal with licence transfers. “It will be comprehensive.”

Worries about safety and cleanup are echoed by 14 area landowners.

“This looks like the old shell game,” wrote Michael O’Keefe of Cochrane.

This report by The Canadian Press was first published Jan. 15, 2020