Should Canada reconsider how it finances wildfire suppression?

As hundreds of wildfires burn across British Columbia, one disaster mitigation expert is recommending that Canada reconsiders how it finances fire suppression costs.

Last year, B.C. alone paid out more than $560 million in fire suppression costs, and it is not uncommon for provinces and territories to dish out $1 billion or more a year,  Glenn McGillivray, managing director of the Institute for Catastrophic Loss Reduction (ICLR), said Thursday. 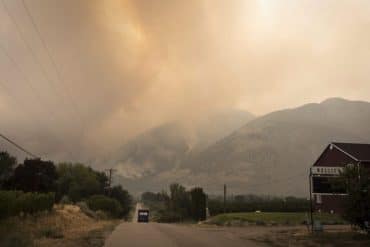 The Snowy Mountain wildfire, currently the largest in B.C., is visible from Cawston, B.C., Thursday, Aug. 2, 2018. THE CANADIAN PRESS/Melissa Renwick

As of Aug. 9, the Insurance Corporation of British Columbia reported that it had not received any wildfire-related claims. “That said, the wildfire season is not over yet and we could receive these types of claims in the coming weeks,” an ICBC spokesperson said.

Fire suppression costs will again be “up there” this year, said McGillivray, who is recommending an approach like Oregon’s, which has been buying a special reinsurance cover from Lloyd’s of London for decades. In effect, Oregon picks up the first US$50 million of fire suppression costs, and if the costs exceed that, Lloyd’s pays the next US$25 million. This “stop-loss” insurance means that the government’s wildfire-fighting expenses would generally be capped at US$50 million, unless costs exceed US$75 million – a rarity in the state – at which time the government would have to pay out of its taxpayer-funded coffers.

This stop-loss cover offers two benefits: first, the US$25 million for each occurrence in potential expenses is exchanged for a much smaller premium. The cost is then shared with private timber lot owners, who can benefit if they help pay the premium and deductible, and one payout can replace several years of premium payments. Second, the volatility in the state’s wildfire fighting budget is largely removed, allowing the state to better plan and budget its resources.

Alberta took out a similar policy in 2006, but a relatively less destructive fire season meant that there was no payout, and the policy was not renewed.

This year, the province has had to seek assistance from other provinces and internationally. One particular challenge is that Ontario is also experiencing an active fire season and unable to assist B.C. at this time. Indeed, B.C. crews were assisting in Ontario until they were recalled to deal with the worsening situation in B.C., McGillivray said.

Aaron Sutherland, vice president of the Insurance Bureau of Canada’s (IBC) Pacific region, said that despite a relatively slow start to the fire seasons, over the last several weeks, the province has seen a “really hot, really dry trend” that has dried out forests.

Sutherland said that there are more small fires going on, which are equally challenging for firefighters “because they have to be in so many different places at once.

“As insurers, we are working closely with local governments, with the province, to [make sure] those in need are aware of how insurance can help them recover in this instance,” he said, noting that there are hundreds of people on evacuation alert across the province. “When you look on the horizon, look at the weather forecast, we are still expecting a lot of hot, dry weather in this province over the next several weeks, so as insurers we are going to keep a close eye on what’s going on.”