Attacks involving “active assailants” are on the rise, and brokers shouldn’t assume that a standard property, commercial general liability (CGL), or even terrorism policy will cover the costs of supporting and helping the victims, a specialist insurer said Wednesday.

“It almost certainly doesn’t,” said Pat Brice, distribution director with CFC Underwriting. “The risk of these kinds of instances is growing and you do need access to the right kind of cover and right kind of support when it does happen.”

Companies affected by active assailant events may have insurance coverage, but policies typically require property damage to be triggered and many don’t cover the costs of victim support. Some insurers have responded to gaps in coverage by offering active assailant policies that have caring for victims at the core of the product: they can provide coverage for medical or psychiatric treatment, relocation of employees or retraining due to injury, compensation to injured employees or retraining due to injury, and funerals, and do not have a liability trigger. 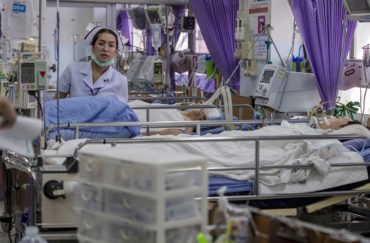 A nurse monitors an emergency ward with victims of a mass shooting in Korat, Nakhon Ratchasima, Thailand, Sunday, Feb. 9, 2020. Thai officials say a soldier who went on a shooting rampage and killed numerous people and injured dozens of others has been shot dead inside the mall in northeastern Thailand. (AP Photo/Gemunu Amarasinghe)

“If you take out the liability angle and effectively make it an employee benefits policy, that is a really valuable piece of additional coverage that you’ve got in place for the people that help you run your business,” Brice said. “The financial support is very, very important for the industries affected by this, but the immediate access to the right kind of expertise and people who know how to handle these kind of events and effectively hold your hand through it is the biggest value we can bring to it.”

Incidents involving individuals looking to bring harm to people in public spaces have occurred frequently around the world. Just days ago, a soldier killed about 29 people and injured dozens more at several locations in Thailand, including a shopping mall. In the last week, there was another attack on the London Bridge. Canada was not immune – in April 2018, a man drove a rented van into pedestrians in north Toronto.

Brice spoke to Canadian Underwriter Wednesday about how terrorism coverage is evolving to deal with these threats. Standard property or CGL policies typically have a terrorism exclusion, which gave rise to the standalone terrorism market, he explained. Terrorism risks used to be events such as bombing, which would involve physical damage, loss of life and business interruption. But in recent years, threats have evolved from purely physical damage to attacks on people instead of property.

Think about the vehicle-ramming and stabbing attack on the London Bridge in 2017 in which the three attackers drove into pedestrians and then stabbed people at the nearby Borough Market. “Lots of hospitality businesses were shut down and blocked off for [about] two weeks, while the authorities did what they needed to do in terms of investigating the incident and making the area safe. A lot of policies wouldn’t have historically covered that.”

As well, terrorist attacks were largely defined by government or law enforcement agencies, and policies covered defined terrorist acts or even specific weapons used. Now, active assailant attacks can be perpetrated by people with psychological issues or those with a grievance against a particular business, and include knife and vehicle-ramming attacks.

CFC’s active assailant coverage is not based on establishing liability before a payout or triggered by a specific set of circumstances. It gives a defined benefit for employees and third parties who were in the venue at the time of the incident and “that effectively pays out as soon as the incident is reported,” Brice said. There is a maximum limit per individual of 10% of the policy limit, so up to $1 million of compensation per individual on a $10 million policy.

Brice says CFC has seen an increase in the past few years in the take-up of active assailant cover generally worldwide, particularly in the United States.