With continued legal challenges and protests surrounding construction of the proposed new Kinder Morgan pipeline, potential insurance repercussions could be just around the corner.

An Insights West opinion poll released last month found that more than one in 10 British Columbians were willing to engage in “civil disobedience” to stop Kinder Morgan from building a new pipeline to export bitumen through the province. That percentage increased from 7% last November to 12% in April 2018. 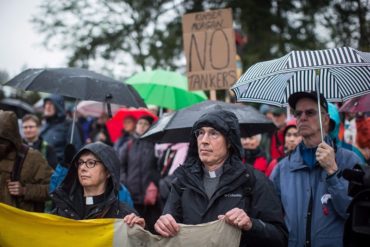 People listen as religious leaders and more than 100 members of diverse faith communities participate in a protest against the expansion of the Kinder Morgan Trans Mountain Pipeline, at the company’s facility in Burnaby, B.C., on Saturday April 28, 2018. THE CANADIAN PRESS/Darryl Dyck

Is damage caused by acts of “civil disobedience” an insured risk?

“Civil disobedience [itself] isn’t really a peril,” Steve Kee, director of media and digital communications with the Insurance Bureau of Canada (IBC), told Canadian Underwriter Thursday. “So, it would really depend upon what happens as a result of the disobedience.”

For example, if protesters started a fire, that would be covered. “In that case, the peril is fire, which is rarely, if ever, excluded,” Kee noted.

In contrast, under named perils for “riot, vandalism or malicious acts,” if protestors caused an explosion, stole something, or decided to open or breach a dam to flood the insured, it would not be covered. Insurance policies covering loss or damage tend to contain exclusions for damage caused by:

Sometimes excluded perils noted above can be covered for an additional premium. Potential terrorism threats add an additional element to the risk.

Chris Short, broking leader in Aon Risk Solutions‘s Energy Centre of Excellence unit, agreed that riots, strikes and civil commotion are standard exclusions within a construction policy. Some markets would offer the coverage, or even an extension within a course of construction policy, but it would be costly, Short said.

But even with these extensions, such as those related to project start-up delays, there has to be a physical loss or damage trigger. “If somebody [a protestor] is just standing there and [employees] can’t get to their worksite, but there’s no damage to the worksite or the work itself, then there’s really no trigger to cause some sort of a loss,” Short said. “If… they start a fire and it damages the site, if there’s actual physical damage, that would be your trigger.”