VICTORIA – Frank Harding is 98 years old and most days he drives his 1990 Volvo sedan to the Comox Recreation Centre where he works out.

One summer, the resident of Courtenay, B.C., said he drove across Canada four times from Vancouver Island to New Brunswick to visit relatives, although he doesn’t drive that much any more. 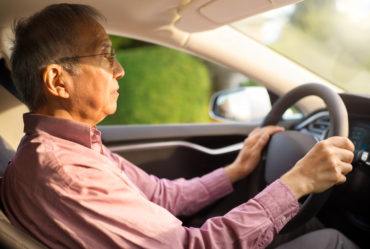 But Harding said he recently faced the prospect of losing his driver’s licence under a revamped driver reassessment program geared at drivers in B.C. once they reach 80 years old, which has raised questions about age discrimination.

Harding, who learned to drive tractors on family farms and trucks during the Second World War, said he was told to take a road test after undergoing a government-ordered driving fitness exam by his doctor.

“I went and I didn’t do so good on my medical,” said Harding. “So, he wanted me to have a road test, so I went and had a road test and I came through with flying colours.”

In March, the B.C. government introduced its Enhanced Road Assessment program, which is the second stage of its fitness testing program for driver’s licences. It replaced the former DriveABLE program, which drew criticism from seniors for its reliance on computer tests and road tests in unfamiliar vehicles.

RoadSafetyBC, the government agency responsible for road safety, mandates every person at age 80, and every two years following, must undergo a Driver Medical Examination Report. The report serves as the primary tool for the assessment of conditions that may affect someone’s fitness to drive.

Harding, who has been through several driver fitness exams since he turned 80, said this was the first time he had to take a road test. He agreed it was time to retest his skills, but he said his life would have changed if he lost his licence.

B.C.’s seniors advocate Isobel Mackenzie said the new testing program is less daunting for seniors, but she is concerned about targeting drivers just because they are 80 years old.

“Why are we doing it based on age and who picked age 80?” she asked.

Driving regulations based on age vary across Canada.

In Alberta, drivers 75 and older must file a medical report from their doctor every time they renew their licence. There are no age restrictions in Saskatchewan, Manitoba, New Brunswick, Nova Scotia, Prince Edward Island or the territories.

Ontario has a Licence Renewal Program that starts at 80. In Quebec, drivers must submit a physician’s report when renewing their licence at age 75, age 80 and every two years following.

Steve Wallace, a long-time owner of a driving instruction business, said the new program in B.C. is much more comfortable for seniors who can now take the exam in their own vehicles and no longer face the test on a computer.

But why not look at a driver’s record rather than age when considering testing for fitness, he said.

Recent data from RoadSafetyBC suggests not every driver asked to take the enhanced road test is 80 or older.

The agency said it processes about 60,000 medical exams for drivers who are 80 and older annually.

Mackenzie said the numbers of drivers voluntarily surrendering their licences increases as they age.