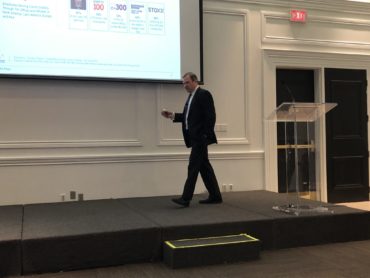 Growing your business doesn’t necessarily mean you’re creating more value for it. That’s a common mistake people make during merger and acquisition deals, according to one expert.

Value is created only when the business gets a return on capital in excess of the cost of capital, explained Howard Johnson, Toronto-based managing director of mergers and acquisitions at Duff & Phelps, a global advisory firm. So even if an acquisition is paid in full upfront, synergies that were paid for are realized, revenue is up, and there’s growth in profitability, there was still a big cash outflow to get to that point. Was the deal still worth it?

“A lot of companies are very focused on growing revenue and growing profitability, but they really should be focusing on growing shareholder value — which means either buying smarter, or realizing more synergies than what you paid for,” he told attendees of the recent FEI Canada Southern Golden Horseshoe Chapter’s EyeOpener breakfast meeting in Oakville, Ont., where he provided an M&A market update. “Those are the ways to create value in an acquisition.”

On the other hand, there’s a lot of pressure on companies to grow quickly. The easiest way to do so is through M&A, since companies don’t like to sit on money. Johnson said there’s $2.2 trillion of cash sitting on the balance sheets of S&P 500 companies. “If you are a CFO of a public company, you know the shareholders are screaming and saying, ‘Either spend that money or give it back.’”

But how to give the money back?

Stock repurchases are not always the best option, since many don’t see that to be an investment in the business. “So I think there is some social pressure on the CFO as well to spend it, as opposed to do a share buyback,” Johnson said.

Another option is to grow the business organically. Although that’s a cheaper option, it’s less-satisfying to some company leaders and investors because it’s slower. “There’s a lot of pressure among public companies, in particular, to grow quickly to keep the analysts happy [and] to keep the stock price up,” Johnson said. “So a lot of the public companies have pressure on them to go out there and continue buying companies…just to keep that growth number.”

Johnson said he wouldn’t be surprised if companies from the United Kingdom made moves into the Canadian market thanks to Brexit. They’ve alienated themselves from much of Europe, and there’s trepidation over the political situation in the U.S., but they like Canada, he said.

“We are seeing a lot of interest in U.K. companies coming into places like Ontario and British Columbia,” Johnson said. “It’s a platform to get to North America and reduce their exposure to Europe. They see some headwinds coming because of all the trade that now has to be renegotiated.”

But when it comes to insurance, that would seem unlikely. At the Ontario Insurance Adjusters Association’s Claims Conference in Toronto in late January, a panel discussion touched on the topic of international players moving into Canada. Panelists agreed that regulation would ultimately keep those companies out of the market.

“A great example: The Number 1 brand in insurance that people recognize [in Canada] is Geico and they don’t even sell insurance here,” said Bryant Vernon, chief claims officer at Aviva. “So you’d think [they] should come into this market and they haven’t. And I think it’s because it’s a difficult market to get into.”