“After all, there are clear professional benefits to becoming known as a connector, and if you’re an introvert, you can create events optimized for how you prefer to socialize,” wrote Dorie Clark, a marketing strategist and professional speaker who teaches at Duke University, in a recent blog. 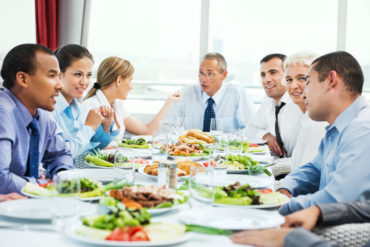 Over the past five years, Clark has hosted nearly 80 networking dinners and opined about various facets of the process. But often, it’s the little details that get in the way, she wrote in the blog How to Organize a Networking Dinner, posted on Harvard Business Review’s website last week.

There are four key logistical points she advises to ensure the gathering is a success.

The first is deciding where to hold the event. While those who are fantastic cooks may love the idea of inviting people to their home for a more intimate experience, the logistics can be difficult.

“I was mortified to discover that the first dinner I cooked at my place — for only six people — didn’t jibe with the dietary needs of two attendees,” Clark wrote in the blog. “I hardly had time to network because I was busy making last minute adjustments in the kitchen.”

For those set on hosting events at home, consider hiring a chef or at least recruiting servers to allow socialization time with guests. “And make sure you provide a variety of entrée options,” Clark advised, noting she now hosts all events at a restaurant, where they are used to accommodating dietary restrictions. (As well, try to hold events early in the work week, so the restaurant is less likely to be crowded and noisy).

Next, determine how to handle payment. While it may be a chivalrous gesture for the host to pay for everyone’s meal, if you host frequent gatherings, it can get expensive fast, Clark notes. Alternately, it’s a logistical nightmare to break down each person’s order on a complicated cheque, and splitting the bill evenly risks being unfair to light eaters.

Clark recommends “going dutch,” and finding a restaurant that can accommodate separate cheques. “It’s an option that strikes most people as fair,” she said. “After all, they’re not joining your gathering to cadge a free meal; they’re attending to converse with great people, and that’s where you should focus your energy as host.”

The third logistical point revolves around sharing information about the guest list in advance. Clark says she sends out a reminder email to attendees about a week in advance, along with links to everyone’s website or LinkedIn profile. That enables them to connect afterward and — if they choose — research their dining companions in advance. If people prefer to be surprised at the gathering, they can simply ignore the links.

The last step as host is to direct the conversation. Bringing people together is only half the battle. After everyone has ordered, Clark says she forcibly interrupts the individual conversations going on to explain that “taking a few moments to do group introductions will give everyone a better sense of who is at the table, so that later in the evening, they’ll know who they’d like to talk with further.”

Guests can state their name, where they live, some basic professional information and then “ask a bonus question that can uncover common interests among the guests.” For example, this could be anything from “tell us about a time you took an action you felt was brave” to “what is a charity you support and why?

“That enables participants to connect on a deeper level and, once the ‘official’ part of the evening is over, to enjoy more nuanced conversations with each other,” Clark said. “Hosting networking events can be rewarding, both personally and professionally. By following these strategies, you can make sure your events are a success and that participants are eager to be invited to the next one.”

1 Comment » for Four tips for hosting a successful networking event