Yes, it is possible for a woman to be a senior executive in the insurance industry and successfully raise a family with young children.

Women all make their own individual choices about the best way to raise their young families, five senior industry execs said at a recent event celebrating International Women’s Day. But one common element of success in juggling priorities at work and home is for women to lean on people in their social networks to help them.

Organized and hosted by the Insurance Management Program at Humber College in Toronto, the Celebrating Women in Insurance Event featured a panel of five women who are senior executives in Canada’s property and casualty insurance industry. Among the many questions they answered, one came from the audience: “How do you manage being in the C-suite and also manage having kids?”

The question from the audience prompted a lively recounting of personal anecdotes about raising a young family. The answers included inspiration and advice for women who aspire to move into the industry’s C-suite.

“I have two young kids at home,” Brett Boadway, chief operating officer of the Insurance Brokers Association of Ontario (IBAO), said just before the question from the audience came up. “I became a mom, and I always had this idea that if you were to be a mom, you also couldn’t have the big career. My current CEO, he is also the primary caregiver of his two young kids. I watched that, and I thought, ‘Oh, I can do that, too.’ So when I came back from mat leave, I put my hand up and said: ‘I’d like the COO job, I think I can do it.’ And that would be my advice to you guys, is that you can do that, too.” 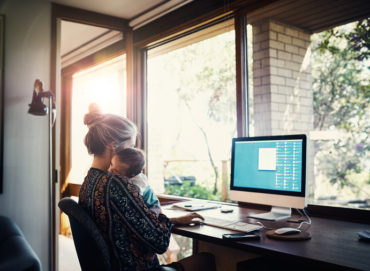 Jeannine Branion, assistant vice president of The Co-operators, told a story about her daughter that illustrates the importance of being present for the kids while taking time at home, away from the office.

“I have one daughter,” Branion told the audience, adding that her daughter will soon be 18. “When she was young, I thought I was doing a great job. We were playing a board game one weekend, and you had these cards. You had to identify what you thought your opponent’s favourite thing was. And for me, she picked email. And I thought, email?

“I said, ‘You had chocolate in your pile [of cards], and so why would you say my favourite thing is email?’ And she said, ‘Well, you do it all the time.’

“It was a real ‘Ah-ha’ moment for me that I needed to make some changes. From that moment on, I think my advice would be, ‘Be present.’ And really distinguish between when you are working and when you are home.”

For Anthea McFarland, senior vice president at Hub International, having a newborn coincided with an extremely busy time at work. “My daughter Abbey was born in October of 1999. I went on maternity leave, and I was back in January of 2000…Hub was going through major mergers and acquisitions, and I was pumped and I was pushed. It was a little crazy at the time.”

McFarland was 26 years old then. She had the support of her husband in making the decision and the help of her mother-in-law. Her child went into Montessori school at the earliest opportunity to enroll in preschool. McFarland said she was aware of being second-guessed; of people asking why she wouldn’t take her full maternity leave or take more time away from work. But she counselled women in the audience to make their own choices about what’s best for them and to stay the course if it works for them.

“That was a sacrifice for sure,” she said. “There were definitely some sleepless nights. You have a newborn and you have to get to the office. But I chose what’s right for me, and you will choose what’s right for you. That’s how it works and don’t let anybody tell you differently.” 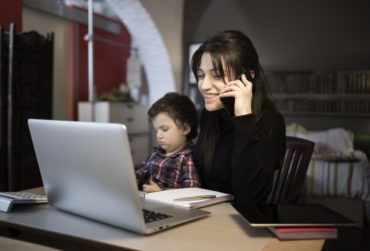 Like McFarland, Donna Ince, senior vice president at RSA Canada, had the support of her husband, who was also a family income-earner at the time their children reached the tender young ages of 4 and 8. (They are now 16 and 20.) When the hockey, soccer and ballet practices ramped up, Ince and her husband made the mutual decision that he would leave his work as a forensic accountant to look after the kids.

“We started getting into that groove of he was really the primary caregiver at home,” Ince said. “It got to a point where he said, ‘Okay, I think I’m going to go back to work.’ It was probably about four years after [the decision to stay at home]. I said, ‘Oh no, you can’t do that. I don’t know how to use the washing machine. You need to stay now. You need to stay at home.’”

Ince was joking, of course, but ultimately her husband continued in his role as the primary caregiver at home. “That’s how we’ve done it. It’s not a typical family, but the kids have gotten used to it,” she said. “But people have to make their own choices. There are lots of families who choose that; there are lots of families who choose to have mom to stay home, or have both incomes. You just have to really figure out what balance works for you. I am very lucky. It really works for me.”

Julie Pingree, senior vice president of Northbridge Financial Corporation, found her groove as a single mother of a young son. Like McFarland and Ince, she was able to lean on family members and people close to her for support.

“One of the things that made it work were the people around me,” she said. “I ended up making very good friends with my son’s very good friend’s mother. And we scheduled everything. She had a very busy job. She was a VP of Finance for Heart and Stroke at the time, so she was busy, I was busy. But between the two of us, we managed.”

The two mothers scheduled out the summer. Their kids would go to the same camps. “She would do the drop-offs, I would do the pick-ups,” Pingree said. “If you want to talk about calendars, it was very important to do that. But I would say there are always people around you who are willing to step in and help. My mother would be another person who obviously helped me a lot during that period.

“That’s what you have to do. Don’t be afraid to lean on people, because there are people who are willing to help.”