The Office of the Superintendent of Financial Institutions (OSFI) could be reissuing a new draft of its proposed new reinsurance rules “within the next few weeks,” a property and casualty insurance industry veteran predicted last week. 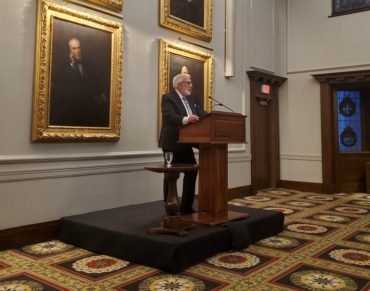 “That in itself could perpetuate the idea of a hard market because there’d be less capacity overnight if that took place, but I don’t think it’s going to happen,” said Cook, who is also chairman of Omega Insurance Holdings Inc. “We will have clarity on that this year, there’s no question in my mind. Whether we like the clarity or not is another matter.”

Part of OSFI’s revisions relate to Draft Guideline B-3, which deals with a variety of reinsurance issues. In the first draft of its proposed reinsurance rules, OSFI expressed concern about insurers rapidly increasing the amount of commercial risk they cover while ceding a substantial portion of that risk offshore to reinsurers not registered in Canada. Specifically, OSFI doesn’t want an unregistered non-Canadian reinsurer to fail, creating a situation in which no funds would be be available to pay out claims occurring in Canada.

But after OSFI posted the first draft of its proposed new rules, Insurance Bureau of Canada (IBC), the trade organization for Canada’s home, auto and business insurers, said Canada’s P&C industry would have to post an additional $21 billion to $30 billion in capital to insure Canadian risks if the rules went through. On average, that would require Canadian carriers to more than triple their capital base, IBC president and CEO Don Forgeron said in September at the 2019 National Insurance Conference of Canada in Montreal.

“It would [use up] – if there’s no additional capital coming in – $30 billion and would leave the industry very, very exposed,” Cook said at the Insurance Institute event, adding that the insurance surplus in Canada is only $42 billion.

“So, it’s a significant issue for the industry. It’s probably the most drastic change that would hit our industry, if it went through as the way it was proposed last year. Fortunately, because of IBC reaction and proposals back to OSFI, [the regulator has] put it on hold and are going to reissue it this year, within the next few weeks actually.”

More clarity on reinsurance and regulatory margins was one of Cook’s Top 10 predictions for 2020 (and beyond) at the Industry Trends & Predictions: 2020 event. Other predictions included that there would be an expansion of alternative risk transfer/financing options and that the insurance-linked securities market would continue to attract and deploy new capital, among others.

4 Comments » for When OSFI will reissue proposed draft reinsurance rules