OTTAWA – The Bank of Canada slashed its key interest rate target by half a percentage point, dropping it to 1.25 per cent in what economists saw as a rapid response to the growing economic shock from the novel coronavirus outbreak.

The central bank said Wednesday that it cut its target for the overnight rate because COVID-19, as the virus is named, was “a material negative shock” to Canada’s already softening economic outlook.

In January, the central bank said the global economy was showing signs of stabilizing, but governor Stephen Poloz opened the door to a rate cut if weakness was more persistent than expected.

In a statement Wednesday, the Bank of Canada said the outlook for the Canadian economy “is clearly weaker” than it was just a few weeks ago, pointing to disrupted supply chains and rattled business and consumer confidence from the virus, as well as rail line blockades, job action by Ontario teachers and harsh winter weather.

With the forecast for economic growth softer than previously expected for the first quarter of this year, the central bank said it is “ready to adjust monetary policy further if required to support economic growth and keep inflation on target.”

The cut in the bank’s key rate is the first since the summer of 2015 and brings the rate to a level not seen since early 2018. The cut is also a dramatic shift from even two weeks ago when a half point cut was difficult to envision, said BMO chief economist Douglas Porter. 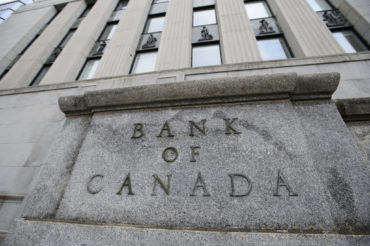 The Bank of Canada building is shown in Ottawa on Wednesday, April 24, 2019. Economists say mounting cases of the novel coronavirus and ensuing unrest through the economy has upped the odds the Bank of Canada will cut rates this week and maybe more drastically than originally forecasted. THE CANADIAN PRESS/Sean Kilpatrick

“We would say it’s likely that both the Fed and the Bank of Canada will cut again,” Porter said in an interview. “Obviously, nothing is a foregone conclusion here, but certainly they seem very primed and ready to move again if the economy in North America does weaken further.”

A note from TD Economics said the cut will likely fan the flames of housing markets and possibly household debt if lower rates make it cheaper to finance large purchases. TD senior economist Brian DePratto said the bank’s statement, and its lack of any discussion about indebtedness, suggests the Bank of Canada is worried more about the immediate risk of the coronavirus.

“You could make an argument that a negative economic shock due to coronavirus could actually trigger the risk that comes from household indebtedness,” he said in an interview.

“If you were to go into a significant downturn, including job losses, that would be the kind of thing that turns that household debt from a theoretical risk into a reality. So I think they’re balancing out what’s that near-term challenge versus those longer term risks and very clearly … they’re more worried about right now.”

Lower rates may prod growth and offset some of the impact from the virus, RBC senior economist Josh Nye wrote in a research note, “but it’s the response from other policy-makers, particularly fiscal and health authorities, that could do more to cushion the blow.”

Most eyes are on the federal Liberals, who are expected to table their first budget of their minority government mandate in the coming weeks.

Speaking at an event north of Montreal on Wednesday, Prime Minister Justin Trudeau said his government was monitoring the impact of COVID-19 on the Canadian economy, including a slowdown affecting investment, tourism and travel, and the auto industry.

“There will be an impact and we’re there to try to find solutions together with companies and communities,” Trudeau said.

This report by The Canadian Press was first published March 4, 2020.