Figuring out which tires should be used in winter is a risk management challenge for many school bus operators, a federal safety organization warned Wednesday.

“If school bus operators do not have access to independent and objective assessments of winter tire performance, there is an increased risk that the most suitable winter tire will not always be chosen,” the Transportation Safety Board of Canada said in its annual report, released to Parliament Wednesday.

TSB’s main areas of focus are aviation, pipeline, marine and railway risks, rather than road safety. But winter tires are on its radar screen because it does investigate railway accidents – including instances when trains hit vehicles at crossings.

A school bus was destroyed near Colborne, Ont. in February, 2015 after being hit by an 8,500-ton freight train with 73 cars and two locomotives. The driver was crossing the tracks slowly and tried to accelerate but instead of moving forward, the bus stayed in place with the rear wheels spinning. The driver and children on board managed to exit the bus before it was hit by the train. The rear wheels on that bus were all-season, TSB said in an investigation report released in February, 2018. 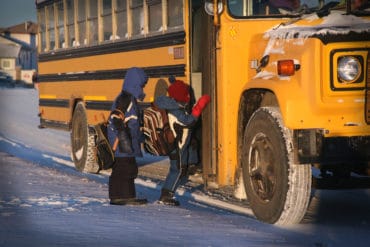 “Given that snow had accumulated on the road, the rear tires could not provide the traction required to propel the bus up the incline,” TSB noted in its annual report to Parliament released Aug. 22, 2018.

At the time of this Colborne, Ont. accident, “there were no regulatory or industry standards to evaluate school bus tire traction test results, similar to those for passenger vehicles or light trucks, to determine which tires were most suitable for winter driving,” TSB added. “As such, bus operators relied on their experience and information from tire manufacturers. If school bus operators do not have access to independent and objective assessments of winter tire performance, there is an increased risk that the most suitable winter tire will not always be chosen.”

Between Jan. 1, 2008 and Mar. 8, 2012, the TSB database shows 810 accidents at train crossings across Canada. Two hundred and fifteen were in Ontario, more than in any other province. In those 810 crashes, there were 101 fatalities. It is unknown how many of these incidents relate to winter driving or the use of winter tires.

For private passenger vehicles, winter tires have been mandatory in Quebec since 2009. The same is not true for Ontario, but since 2016, Ontario auto insurers have been giving discounts to motorists with winter tires.

“Claims are reduced when people have winter tires on their cars, especially driving in climates like we have in Ontario,” CAA Insurance president Matthew Turak said earlier this year during a press conference.

In Ontario, the amount of the auto insurance discount varies from insurer to insurer.

More News
Related
Legalization of marijuana calls for ‘more thorough’ risk assessment from brokers: OIAA speaker
Chubb’s multi-line practice to focus on large transportation clients in U.S. and Canada, help address wide range of risks
Making ICBC a co-op one option for B.C., competition must be part of any option selected: taxpayers federation
Known risks and new technology such as Hyperloop can pose challenges: Munich Re