ST. JOHN’S, N.L. – The family of a fishing guide who died in a Labrador floatplane crash this summer is suing the Quebec airline for damages, alleging negligence and breach of contractual duties.

Seven men, including the pilot, were on board the Air Saguenay-owned de Havilland DHC-2 Beaver when it crashed into Mistastin Lake, about 100 kilometres southwest of Nain in Labrador, sometime on July 15, on what began as a fishing expedition. 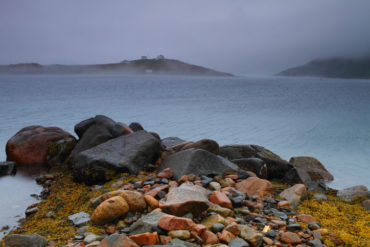 A weeks-long search led by the RCMP failed to recover both the wreckage of the plane and the bodies of three of the men, preventing the Transportation Safety Board of Canada from conducting a full investigation.

The cause of the crash was never determined, but a lawyer representing the family of Clifford Randell, who perished in the crash, said in a statement that his case will argue pilot error was the most likely explanation.

“Through this case we will get help for Clifford Randell’s wife Kim and their four children,” the statement from Jamie MacGillivray said.

An untested statement of claim filed at the Newfoundland and Labrador Supreme Court on Friday says says a “probable inference” about what caused the crash is alleged substandard skill by the pilot.

It claims improperly maintained equipment may have contributed to the crash.

“There may be other possible explanations for the crash, but the most likely explanation is negligence in the operation and maintenance of the DHC-2 Beaver,” the statement alleges.

The lawsuit also alleges that the airline failed to adapt to safety standards, because none of the deceased people recovered from the water were wearing personal flotation devices – though that was not the standard at the time.

It refers to amendments to the Canadian Aviation Regulations from earlier this year that will take effect in September 2020, requiring floatplane occupants to wear personal flotation devices when operating above water.

The Transportation Safety Board’s report on the incident said pilot Gilles Morin, whose body was never recovered, was qualified for the flight under existing regulations and had over 16,000 hours of experience on DHC-2 aircraft.

It also noted “no anomalies” upon reviewing the floatplane’s maintenance records.

Air Saguenay did not immediately respond to requests for comment on Saturday. Earlier this year, airline president Jean Tremblay spoke highly of Morin’s professionalism as a pilot and said the aircraft had been inspected this spring.

Randell’s family is seeking damages for loss of care and companionship, loss of financial support and burial and funeral costs, among other things.

Randell was 50 years old and lived in Grand Falls, N.L., at the time of his death. He left behind his wife, two sons and two daughters, all of whom are named as plaintiffs in the statement of claim.

A short biography of Randell on the website for Three Rivers Lodge, altered this summer after the accident, indicated 2019 was his fourteenth season working as a guide at the lodge.

“Cliff is confident, careful and packs a deep understanding of our waters, their trout inhabitants and how to connect them with our enthusiastic anglers,” the description read.

Randell and fellow guide Wayne Winsor were both working the July 15 fishing trip, travelling with guests from the lodge near Schefferville, Que., to the remote lake in Labrador.

Four lodge guests from the United States were on board the plane, including a father and his two sons.

The Transportation Safety Board report said the take-off from Three Rivers Lodge was delayed that morning because of fog and mist.

There is no weather station directly near Mistastin Lake, which is only accessible by plane, but the report says the Nain weather station recorded light winds and “a few clouds at 1,000 feet above ground level that dissipated in the morning.”

RCMP officials have said the extreme depths of the lake and its remote location posed challenges for divers during the lengthy search that officially concluded on Aug. 8, though Transportation Safety Board’s report said “the RCMP continues to fly over the area when possible.”

The plane’s tail and other debris had initially been spotted in the water by aircraft on July 16, but the RCMP believed the debris drifted before divers arrived.

This report by The Canadian Press was first published Nov. 16, 2019.