“It’s forced companies to kind of look at their policies and procedures around travelling to higher risk countries where there may be instability,” says Patrick Doyle, American Express Global Business Travel’s Canadian general manager.

Hong Kong has seen large scale demonstrations since June after the government introduced a bill that would allow its citizens to be extradited to China if they are arrested. 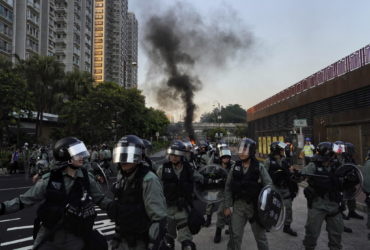 The Canadian government urged travellers, including 300,000 Canadians living in Hong Kong, to exercise “a high degree of caution” in its travel advisory by pointing out that acts of violence have resulted in serious injuries as security forces clash with demonstrators.

The disruptions forced employers to examine who should travel, when they should go and even consider if travel is required at all, said Doyle, whose firm helps companies mitigate risks by developing travel procedures, briefing employees on travel risks and assisting them once an event unfolds.

Some Canadian firms have suspended or reduced corporate travel to Hong Kong in reaction to the unrest just like they did in the aftermath of the detentions late last year by China of a Canadian entrepreneur and a former diplomat, said Paul Doucet, security director for Canada at International SOS, a travel security firm.

Since Sept. 11, 2001, there’s been a series of landmark terrorist attacks including events in Mumbai, Paris and Nice. Each has updated the risk assessment resulting from the new threats.

Hong Kong is an example of a traditionally low-risk, safe destination for travellers that suddenly changed, said Doucet, who worked for years in Asia.

“I underestimated the level to which this could reach with the unrest there,” he said in an interview.

While some backlash against anti-democratic moves amid a gradual shift from British to Chinese rule was anticipated, the level of violence exceeded most expectations, he said.

“It’s important to be really in tune with the tea leaves …and to make sure that you’re not underestimating the risks in low-risk jurisdictions because they can happen.”

In addition to terrorism, risks can also come from natural disasters such as hurricanes, sinking ships, burglaries, medical emergencies or infections diseases such as malaria or the Zika virus.

Global business travel, which has increased despite the proliferation of teleconferencing technology, is expected to reach US$1.7 trillion by 2022, American Express says.

Companies are seeking more help to protect their employees in part because of their legal responsibilities.

Most employers are familiar and compliant with local health and safety standards and their legal duty of care. But many are less familiar with their legal liabilities when an employee is travelling abroad, said a report on Canada’s mobile workforce.

“An employer has a legal obligation to take all precautions, reasonable in the circumstances for the protection of the worker,” said Lisa Bolton, an employment and labour lawyer with Sherrard Kizzy LLP, who co-authored the 2016 paper with the International SOS Foundation.

A workplace extends beyond an office building or manufacturing plant.

“If you as an employer are sending an employee somewhere else to work, then that’s part of their workplace and that extends the employer’s obligations to make sure that those protections are in place for a worker,” she said.

Bolton said employers are required under Canadian and provincial labour laws to take into account risks and hazards and to ensure there’s training and education to enable employees to work safely.

The growing diversity of management and executives is also changing requirements so that women, visible minorities and gay employees feel secure when working overseas.

A recent survey released by the Global Business Travel Association found that 83 per cent of women reported having had concerns about their safety while on a business trip in the previous year, but only 18 per cent of corporate travel policies specifically address matters related to the safety needs of female business travellers.

The workers should educate themselves, examine government travel advisories to understand potential threats, and ensure they can communicate with their bosses if an event surfaces.