Oil refineries and other large industrial operations that are surrounded by residential communities need to work harder to ensure safety and protect their own bottom lines, multiple experts say. 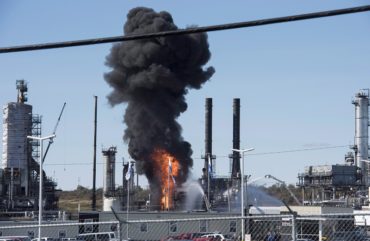 Flame and smoke erupts from the Irving Oil refinery in Saint John, N.B., on Monday, October 8, 2018. THE CANADIAN PRESS/Stephen MacGillivray

Kevin Scott, Irving Oil’s chief refining and supply officer, told reporters at an afternoon briefing that the company was “very grateful today – and being Thanksgiving, I think it’s appropriate.”

He said there had been a problem with the refinery’s diesel treating unit, which removes sulphur from diesel fuel, but it wasn’t yet clear exactly what caused the malfunction.

Sean Tucker, an associate professor at the University of Regina who specializes in occupational health and safety, said there’s a lot of public concern in Canada about how oil is transported, but not much attention is paid to refineries themselves.

“We need more attention there, and it would lead to safe proximity for residential communities,” he said.

Giving one example from Regina, Tucker said a new residential expansion was planned near the Co-op Refinery Complex. Health and environmental authorities, along with the refinery itself, were opposed, but city council approved the development in 2016.

“What’s problematic is that these refinery capacities will grow over time and the residential community will remain in the same place,” Tucker said.

Tucker said one issue is that large refineries and similar businesses often operate in smaller jurisdictions in provinces such as Saskatchewan, New Brunswick and Newfoundland and Labrador.

“My concern is that there’s a power imbalance between the power regulator and these large refining companies,” said Tucker.

Compounding the issue is aging infrastructure, which Tucker said can lead to “fires at these refineries every two years or so.”

He said what’s needed are rigorous safety programs, where pipes are visually inspected and seals are checked.

Irving did not immediately respond to a request for comment on its own measures, but the company’s website describes safety as a “way of life” and says the refinery strives to be a “good neighbour.”

The company’s community liaison committee meets on a quarterly basis to provide an opportunity to for neighbours, government officials and refinery staff to discuss projects and address questions and concerns.

“Our aim is to grow our community programs, so we can continuously improve this vital relationship,” the website says.

“If they have these incidents, it can lead to significant loss of production for some time,” he said.

“And if it’s a larger accident … they could lose hundreds of billions of dollars.”

The Irving facility in Saint John was shut down on Monday while investigators looked for the cause of the blast.

According to the Irving website, the refinery produces more than 320,000 barrels of “finished energy products” every day, with more than half going the U.S. northeast. Scott said the company hoped to minimize the impact on clients.

In addition to the potential loss of production, companies that have safety issues could face legal concerns as well.

Shafik Bhalloo, a lawyer and professor at Simon Fraser University, said anyone adversely affected by a refinery explosion could potentially launch a civil claim against the company involved – if they are able to prove damages.

While he said Monday’s blast “pales” to the deadly explosion on BP’s Deepwater Horizon oil rig off the Louisiana coast in April 2010, Bhalloo added: “We can draw from that experience what could happen.”

In the BP case, billions of dollars worth of property was damaged and numerous lawsuits were filed. BP settled most of the cases, paying out close to $8 billion in damages, he said.

Last fall, Irving was ordered to pay $4 million after pleading guilty to 34 counts stemming from the investigation into the Lac Megantic disaster in 2013.

Those charges under the Transportation of Dangerous Goods Act resulted from a joint investigation by Transport Canada and the RCMP that was prompted by the deadly Quebec train derailment.

Bhalloo said it’s also important for governments and regulators to make sure the business does not pose any unusual or serious threat to people in the area, and that the business has viable plans in place for potential serious accidents.

“Where a business is engaged in a potentially or inherently dangerous business activity near to residential communities, the business should be concerned about the safety of residents nearby, and should have plans in place to protect individuals in the event of an accident,” he said.

– with files from Adam Burns