Millenials – the ever-connected, technologically savvy age group – are actually most likely to ask a driver to stop using their mobile device if they are a passenger, a new Travelers Canada survey has found.

Distracted driving has been cited recently by some carriers, such as Aviva Canada, as one of the reasons behind recent requests for rate increases in personal auto. 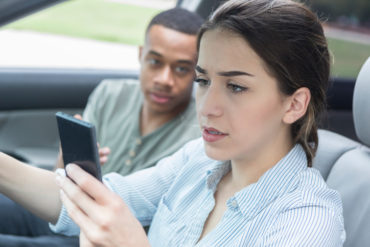 The ability to track accidents where distracted driving was a causative factor remains imprecise because people don’t always self-report, said Jordan Solway, group general counsel and vice president of claims at Travelers Canada. And there isn’t always evidence available to confirm a driver was on their phone when a collision occurred.

“However, we have seen accident rates increase in certain areas, particularly with respect to rear-end collisions and sometimes there is no evidence of braking, which would suggest that the driver was not paying attention,” he told Canadian Underwriter Friday. “The fact remains that distracted driving has now surpassed impaired driving as the leading cause of highway-related fatalities and that validates the view that there has been an increase in claims involving distracted driving in general.”

Travelers Canada’s survey found 59% of polled Millenials (ages 18-34) have asked a driver to stop using their mobile device while a passenger in the vehicle. This compares to 41% of respondents aged 35-44; 45% of those aged 45-54 and 30% of respondents aged 55 and older. The survey of Millenial behaviours and attitudes related to distracted driving involved a poll of 948 Canadian drivers 18 and older.

“It is particularly compelling – and encouraging – to see that the demographic most comfortable with asking a driver to put down their mobile device is Canadian youth,” said Solway.

What could be contributing to this finding? “It is hard to say, but clearly there is an understanding of how distracting the use of device can be while driving and they appropriately feel empowered to raise their concerns,” Solway said. “This is a generation which is different than all others since they have been exposed to technology from an early age and have a high level of comfort with its use but also are cognizant of the dangers.”

The survey also highlighted some concerning findings. For example, 44% of polled Millenials reported calling someone they knew was driving. Thirty-six per cent have texted someone they knew was driving. In addition, Canadian drivers ages 18 to 54 are more likely than older drivers to admit to texting, answering a call or sending an email while driving, with 36% admitting to doing so once a week or more.

What can be done to help reduce these numbers? “Creating a level of awareness about basic facts such as regardless of how good your driving skills may be, the use of a mobile device will impact your reaction time and that increases the risk of accident,” Solway said.

The Travelers Institute, the public policy division of The Travelers Companies, Inc., highlighted the survey results at its Every Second Matters symposium at the University of Calgary Oct. 3. The intention of the initiative was to engage people, particularly Millenials, about distracted driving so perceptions and behaviours will ultimately change. “This is not dissimilar how perceptions and behaviours regarding impaired driving have changed over the past 20 years. While it does still occur, it has been substantially reduced and part of that is a function of a dramatic change in attitudes about what is and isn’t acceptable.”