February 24, 2020   by Adrian Wyld and Paola Loriggio - THE CANADIAN PRESS

TYENDINAGA MOHAWK TERRITORY, Ont. – Several protesters were detained Monday morning as provincial police moved in to clear a rail blockade on Tyendinaga Mohawk Territory in central Ontario that has brought freight and passenger rail traffic to a virtual standstill.

The arrests came hours after the protesters ignored a midnight deadline by police to leave their encampment near Belleville, Ont., or face criminal charges.

Dozens of officers arrived at the blockade Monday morning, and around 8:30 a.m. they detained several men and took them away. Several dozen other officers lined up in front of the remaining protesters at the encampment, which has been up for about three weeks. Officers moved in again around 9:15 a.m. to take more men away. 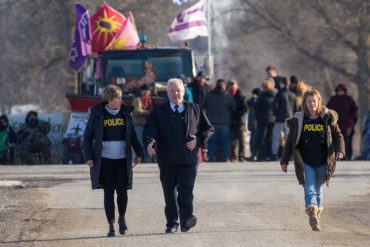 A spokesman for the Ontario Provincial Police said the protesters have since pulled back from the rail tracks.

The provincial police said its liaison team had tried to negotiate peacefully over the past few weeks.

“We have remained respectful of the ongoing dialogue, including issues of sovereignty between our Indigenous communities and various federal ministers, and have hoped for productive communication leading to a peaceful resolution,” said Dickson.

“The (Ontario Provincial Police) notes the broader societal impacts of this extended protest have correspondingly increased risks to public safety closer to the protest sites. Unfortunately, all avenues to successfully negotiate a peaceful resolution have been exhausted and a valid court injunction remains in effect.”

A second encampment set up by the protesters nearby remains in place, Dickson said. Tires were seen burning in that location Monday morning. By midday, the encampment remained and some demonstrators banged drums and chanted while workers from CN, which owns the railway, arrived on site and started inspecting the tracks.

The barricades were set up in response to a move by the RCMP to clear protesters who had been blocking access to a Coastal GasLink natural gas pipeline worksite on Wet’suwet’en territory in northern British Columbia.

Hereditary chiefs of the Wet’suwet’en Nation oppose the work on their traditional territory, despite support from elected band councils along the pipeline route.

Prime Minister Justin Trudeau was to meet with the cabinet incident response group Monday morning to discuss the situation.

Meanwhile, about 200 protesters were marching through downtown Ottawa in solidarity with the Wet’suwet’en hereditary leaders. They were escorted by police, who warned that traffic could be disrupted on and off all day.

As protesters blocked intersections one by one, they danced and chanted slogans like “U-G-L-Y, CGL (Coastal GasLink) you cheat and lie.”

“But at the same time, the impact of these rail disruptions is untenable. It can’t continue,” he said.

According to a statement from the PMO, Trudeau informed the premiers of measures being taken to ensure that critical needs are addressed, including propane, chemicals to treat drinking water, and essential agricultural products.

“We will remain in close contact with all provinces to address urgent needs as required, and we will continue to support co-ordinated efforts to find a resolution,” the statement said.

Trudeau and the premiers also reiterated their commitment to resolving the situation peacefully.

“If the prime minister had not made that speech the Mohawks would have taken down everything,” he said. “They were ready. We were on the phone.”

Na’moks said all five hereditary chiefs were expected to meet in northern B.C., on Monday to plan their next steps and talks with the RCMP could resume on Thursday at the earliest.

He said the chiefs will not budge from their demands for the Mounties to remove every component of a mobile unit from their territory before meeting with them.

Dawn Roberts, a spokeswoman for the RCMP, said the mobile unit had been temporarily closed and discussions were underway with the deputy commissioner about its future.

The chiefs visited supporters this week in Tyendinaga and Kahnawake south of Montreal, and repeated that their conditions for talks to begin had not been met.

This report by The Canadian Press was first published Feb. 24, 2020.