This research can help defend slip and fall claims

If your client owns or manages a property, can it put a number on the slipperiness of the surfaces?

This is what companies managing an Ottawa property did after they were sued for $2.9 million by a civil servant who slipped 11 years ago on the kitchen floor of her workplace.

Moira Caron, a former federal government lawyer, suffered mild traumatic brain injury after falling in the kitchenette of her workplace in January, 2008. She lost consciousness and was taken to hospital by ambulance. 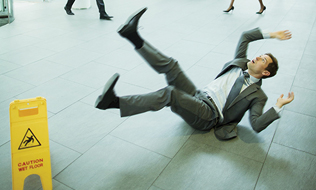 Caron’s lawsuit against Oxford Properties and other defendants was dismissed, in Caron v. OMERS Realty Corp., released Feb. 28 by the Ontario Superior Court of Justice.

CPP Investment Board Real Estate was also named as a defendant.

The defendants were responsible, under the Ontario Occupiers’ Liability Act, for the safety of the building in which Caron worked, Judge Pierre Roger of the Ontario Superior Court of Justice wrote in Caron.

During the 15-day trial this past fall, both the plaintiff and defendants brought in expert witnesses who studied the slip resistance of the kitchen floor.

The defendants’ expert tested the floor and made a finding on the co-efficient of friction.

The co-efficient of friction is a measure of how much force you need to apply in order to slide one object (such as the bottom of a person’s foot) over a surface.  In essence it is the ratio, of the sliding force needed to overcome friction resistance, to the force pushing both objects together (such as the weight of a person standing on a floor). The higher the coefficient of friction, the greater the slip resistance.

In Caron v. OMERS Realty, the property managers’ expert witness said the average dynamic co-efficient of friction of the kitchenette floor – while wet – was 0.37. This –in the opinion of the defence expert witness – was good enough.

Caron had her own expert witness who said a slip-resistant floor mat (which was not there when Caron slipped and fell) would have reduced risk by creating more friction. But the plaintiff’s expert did not conduct any slip resistance testing, Judge Roger wrote. The plaintiff’s expert’s assessment was limited to reviewing documents.

Four days after Caron slipped and fell, a mat was installed in front of the sink of the kitchenette.  Caron was not the first person to slip on a floor surface in that building.

But Justice Roger found that the defendants met their duty of care under the Occupiers Liability Act. This “despite the fact that testing imperfectly accounts for many different types of soles, different gaits, and movement, I find that rest results and the opinion of the expert presented by the defendants nonetheless sufficiently reliable considering the circumstances of the case.”

Much of the 34-page ruling discussed whether Caron’s medical conditions were a result of the slip and fall and how much the defendants would owe in damages if they were liable. Justice Roger would have assessed damages at more than $370,000 not including interest ($290,562 for loss of past income and $80,000 for pain and suffering) had he found the defendants breached their duty of care. Caron has argued damages were nearly $3 million.

Building owners and tenants have a legal duty to make their premises safe but that duty “requires neither perfection nor unrealistic or impractical precautions against known risks,” Justice Roger wrote.

In the case of Caron’s workplace, the kitchenette was cleaned twice daily and inspected by the cleaner. It was also inspected by Public Works and Government Services Canada (which was not a defendant) every four months and by Oxford Properties twice a year, Justice Roger said.

More News
Related
After a seven-year, $33K insurance settlement, claimant disputes his $5K legal bill
Mechanic barred from suing employer over workplace injury
Do your insureds understand a “material change in risk”?
How this dry cleaner got sued over 50-year-old pollution