Want to place insurance that covers a client whose revenue suddenly plummets because of a disinformation campaign?

This might be easier said than done, but one commercial insurer with a Canadian branch is hoping to change this.

Right now, there is only very limited coverage for a scenario where a firm’s revenue drops significantly as a result of lost sales caused by bad publicity, suggested Nick Creatura, president and chief executive officer of commercial insurer CNA Canada in a recent interview.

“Reputational risk is something that is going to have to become a mainstream insurance product,” Creatura said in an interview. 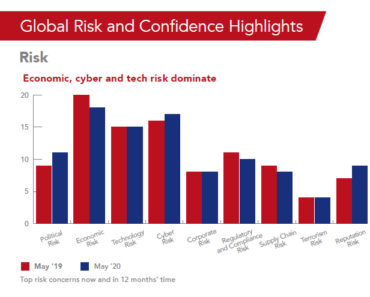 Reputation risk is not everyone’s top concern (or even in the top 3) but the survey results indicate it is growing.

Respondents were asked which risk concerns their business the most now and in 12 months’ time. They were then asked to select one risk from a list of nine. Worldwide, the result for reputation was 7% in May 2019, rising 9% for May 2020.

In this day and age, a lot of news is disseminated over the Internet through social media channels, CNA Hardy said in the report.

“It can be hard for businesses to understand exactly who they are talking to; where commentary is originating from and of course to correct misconceptions once they have been widely shared. The phenomenon of ‘fake news’ has been widely discussed in terms of politics, but businesses can also be undermined by the same strategies,” said the insurer.

Separately, the Canadian Press reported Tuesday that one in four people who took part in an Ipsos survey said they didn’t trust the Internet. Part of that distrust stemmed from fake news disseminated by social media sites such as Facebook and Twitter.

“From an insurance perspective, what that really means is the role of trusted advisor for the broker, as well as for the insurers, increases in importance,” he said.

What makes reputational risk different from something like flood or fire is it is intangible.

“At one time, we only thought of insurance as insuring tangible things – buildings, homes, automobiles, that sort of thing. Now, it’s data, trading relationships and reputation.”

With a directors and officers liability policy, one may measure the impact of an action on the share price of an organization, said Creatura.

“At one time that was viewed as impossible to insure whereas now, public and private D&O is very much a mainstream product. We expect that one day, reputational risk is going to get to that stage as well. But it’s early days now and it is really only insured in limited cases where you can clearly demonstrate an economic loss and only for certain causes of loss.”

Causes of executives’ concerns over the economy include tariff wars and Britain’s impending exit from the European Union, CNA Hardy suggested. Whereas cyber risk encompasses things like hacking, technology risk is how CNA Hardy describes the risk that an information technology project will not produce the desired business results.

The survey of 1,500 leaders (100 of whom were based in Canada) was conducted by Opinion Matters on behalf of CNA Hardy. The survey was conducted this past February and March.

Nearly a third (450) of respondents were based in the U.S. and Britain while another 500 were based in France, Germany, Singapore, Australia and South Korea.