Insurers have “long way to go” on risk and capital management

As Canadian businesses face a new host of risks, the applicability of insurance as the proper means to cover those risks is coming into question, according to experts from KPMG LLP.SARS, blackouts, floods and hurricanes experienced through 2003 have put…

The latest “benchmark survey” released by the Risk and Insurance Management Society (RIMS) suggests that the pace of price increases in the U.S. commercial insurance marketplace slowed dramatically in the third quarter of this year. “After the staggering increases [in… 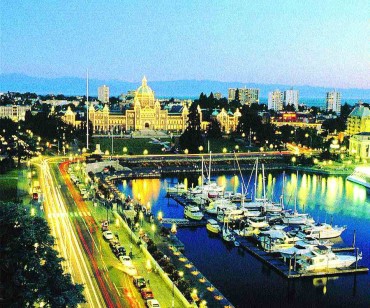 Three years ago, risk managers were focused on how to promote their profession. Now, for better or worse, risk management is center stage. But, what will risk managers do with their newfound fame? At this year’s RIMS Canada conference, risk managers “took the bull by the horns” and talked about how to make the most out of the intense pressure they are currently under, to finally advance the cause of enterprise risk management in their organizations.

Halifax-based Huestis Ritch, member of Canadian Litigation Counsel, has named Elissa Hoverd as an associate of the firm. She joined the Ontario Bar in 2001 and the Nova Scotia Bar earlier this year. Toronto-based Kingsway Financial Services has made several…

Brokers serving the bigger Canadian commercial risk pool outside of the mega international corporations say that rising insurance industry profitability has not softened the tough approach of insurers to pricing, terms and availability of coverage. But, with many commercial clients across the corporate earnings spectrum suffering through their third consecutive year of premium increases, there is acknowledgement by insurers of growing “market rate fatigue”, brokers add, which is bringing about a slow softening to the pricing of property risks with even a few new underwriters looking to venture into the broader commercial marketplace.

Automobile theft costs Canadians close to $1 billion every year. To combat this alarming trend, vehicle owners should adopt a more proactive technological approach to risk management – and the insurer must provide the incentive to do so. Automobile insurance…

The Risk and Insurance Management Society (RIMS) is praising a new draft document on enterprise risk management (ERM). The draft, created by the Committee of Sponsoring Organizations of the Treadway Commission (COSO), its project advisory council and Pricewaterhouse Coopers LLP,…

The complexity of today’s business environment is largely a result of both the volume of change and the speed at which it occurs. Driven by shareholder expectations, the scrutiny of regulators and the demands of consumers, corporations are learning that managing risk is significantly different than it was even three years ago. 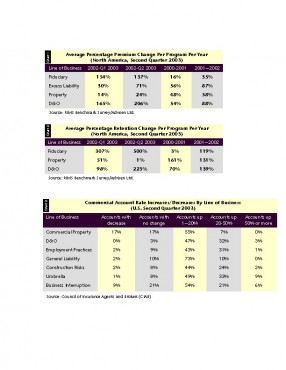 Curtain Call? On The Hard Market

Waiting in the wings like nervous actors on opening night, risk managers are preparing for the upcoming insurance renewal season, unsure of the reception before them. Over recent years they have received a less than warm greeting from underwriters. But, recent surveys of the commercial insurance marketplace suggest that there may well be a “turning point” near – or at the least a “moderation” of the hard market which has dictated pricing for the last two years. However, CU’s annual roundup of Canadian risk management views indicates that the hard market is far from over, although its intensity has shifted from property to casualty/liability lines. And, in light of recent catastrophes from SARS to the “blackout of 2003”, the pressure from corporate boardrooms has increased on risk managers. 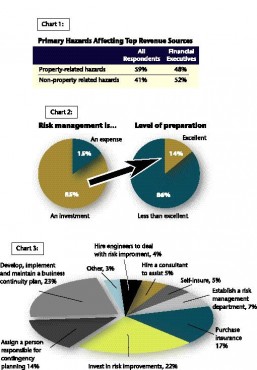 From newspaper headlines to the corporate boardroom, risk management is becoming a high profile proposition. As companies react to stories of corporate scandals and multi-million-dollar lawsuits, how does this align with the long-term risks facing corporations daily. A recent study compared the views of risk managers and financial executives on the greatest threats to their corporations, as well as the best means of addressing these threats.

According to the Insurance Bureau of Canada’s (IBC) “Facts 2002”, the individual perils that comprise severe thunderstorms – tornado, hail and straight-line winds – have been responsible for more than half of the natural catastrophe losses incurred by Canadian insurers over the past 20 years. While the earthquake threat in Canada is very real and must be managed, insurers should not ignore the risk of significant losses from severe thunderstorms.