Nearly one in four chief executive officers surveyed by PriceWaterhouseCoopers “strongly agree” that how their firms manage people’s data will “differentiate” their companies.

“CEOs are particularly anxious that breaches in data security and ethics, and IT outages and disruptions could impair public trust in their industry,” PwC said of the findings from its 20th CEO Survey, released Monday. “The vast majority are already taking steps to forestall such problems, although it’s the CEOs of the largest companies who tend to be most proactive in these areas.”

The survey included responses from 95 insurance CEOs in 39 countries.

“Insurance CEOs are also acutely aware of the disruption and change facing their industry, the transformational impact of which is now evident in areas ranging from robo-advice to pay-as-you-go and sensor-based coverage,” PwC stated. “Concerns over regulation, competition from new market entrants, the pace of technological change and especially shifting customer behaviour have continued to rise from their already high levels in previous years.”

Respondents were asked to what extent they agreed or disagreed with certain statements. Worldwide, twenty four percent “strongly” agreed with the statement: “how we manage people’s data will differentiate us,” PwC noted. Another 40% of respondents agreed, 7% disagreed and 2% strongly disagreed.

Two thirds of respondents agreed that “automation and artificial intelligence pose a threat,” PwC noted. “They’re right to be concerned. The algorithms that underpin automation, robots and smart machines shape lives far more than many people realise. How we navigate websites, how we interact with connected devices, how the gig economy works: all are influenced by code. This creates practical challenges, like ensuring that machines carry out human orders effectively, in the way they were intended.” 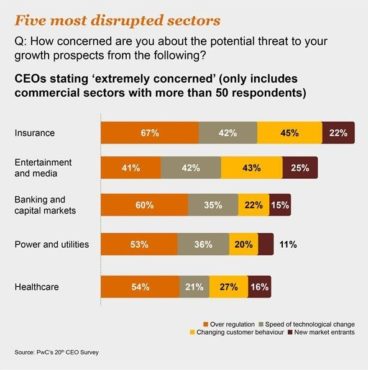 Respondents were asked how concerned they were about certain “potential economic, policy, social and environmental threats” to their organizations’ growth prospects.

Nearly a third (31%) were extremely concerned about geopolitical uncertainty, while 43% were somewhat concerned.

One in five (19%) were extremely concerned about the future of the eurozone.

In June, 20-16, a slight majority of British voters, in an unbinding referendum, voted in favour of having the United Kingdom leave the 28-nation European Union. Britain negotiated an opt-out from the euro. The EU has a customs union through which goods flow freely. Nineteen members – including Germany, France, Italy and Spain – use the euro as their currency. The EU negotiates free trade agreements on behalf of its members and EU citizens have the right to seek employment in EU nations other than their own.

In PwC’s CEO survey, 38% of respondents said there were “somewhat concerned” about exchange rate volatility while another 31% were “extremely concerned.”

More than a third (35%) were somewhat concerned about climate change and environmental damage while 15% were extremely concerned.