While “hot” topic areas like social media, mobile, analytics, big data, cloud, digital and Internet of Things (IoT) are still discussed more than they are deployed in most cases in the insurance industry in the United States, the balance is shifting, suggests a new report from Novarica. 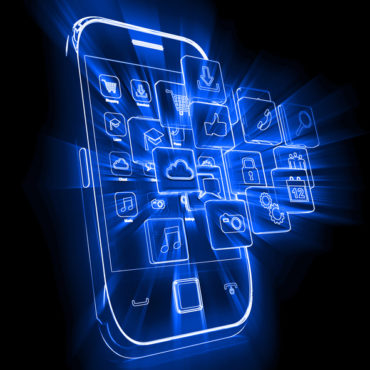 The fourth annual emerging technology report, released on Wednesday by the research and advisory firm, found that one in four insurers polled is planning a pilot in analytics, software-as-a-service (SaaS) or mobile in 2017. The use of social media for data analytics has more than doubled since 2014, the report added, but is still used by less than half of insurers. As well, fewer than 20% of polled insurers have performed “hard return on investment” calculations on their investments in these areas, but most of those that have deployed reported the value is “widely recognized within their companies.”

“These seven are often lumped together as ‘emerging technology areas’ by insurers, although they share little else in common,” said Matthew Josefowicz, president and CEO of Novarica, in the release. “They cross consumer media and communications (social), technology platforms (mobile and cloud), tools (analytics some parts of big data, IoT, drones), and strategy (digital). But they all enable potentially disruptive changes in insurance value chain.” 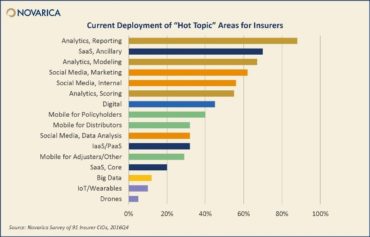 Participants in the survey include 11 large and 58 midsize P&C insurers, with the dividing line between large and midsize being US$1 billion in annual premiums. P&C insurers in the sample group are primarily multi-line, but also include several specialty and commercial lines insurers, as well as a few mono-line workers’ compensation insurers and a couple of personal lines insurers. Thirteen large and nine midsize life/annuity insurers were also included.

According to the report, over the past three years, these technologies have become more accepted and understood throughout the insurance industry, with the number of participants reporting that none of these technologies apply to them continuing to decline.

“While few of the start-up creative carriers and digital distributors are likely to pose a real threat to the industry, many of them are showing insurers how emerging technology can be used effectively to transform the core processes of risk analysis, transaction processing and stakeholder communication,” the report concluded. “Those insurers that learn from them most effectively are likely to have a distinct advantage over those that neglect their lessons.”