The business processes you should automate now

Invoice processing and after-hours self-service are among the processes you could be automating today with advanced computing technologies.

Aviva Canada has automated the reconciliation of invoices, the company’s chief claims officer, Bryant Vernon, reported during a Canadian Underwriter webinar Thursday. As a result of that automation, Aviva was able to increase the number of rebates it got from vendors because it is processing invoices more quickly, allowing the insurer to re-deploy staff to the front lines in order to help out customers.

Vernon was one of three panellists to discuss the P&C industry’s digital path during the pandemic on How COVID-19 can improve your digital health, hosted by Canadian Underwriter.

Robotic process automation (RPA) could also help get rid of a lot of time and effort on administration, said panellist Lynne vonWistinghausen, head of operations and technology for Marsh Canada.

RPA is the use of robotics to automate a business process from end-to-end, as defined in a company blog post by Arun Khehar, senior vice president, applications, for Eastern and Central Europe, Middle East and Africa at Oracle Corp. 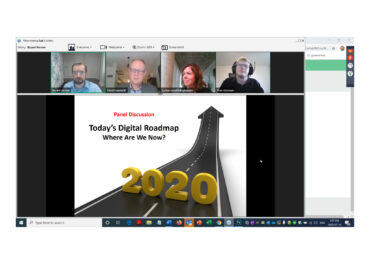 RPA is not quite the same thing as artificial intelligence. AI is when technology mimics human cognition such as learning from experience, identifying patterns and deriving insights, reports Mark Breading, a partner with Boston-based Strategy Meets Action.

But AI and RPA “can work hand in hand and are complementary,” said Ron Glozman, founder and CEO of Chisel AI, during Canadian Underwriter’s digital health webinar Thursday. “AI has actually been around for a long time, maybe longer that people think.”

For example, in the early 1970s, there were “expert systems,” some of which were used to pilot spacecraft because there is a very well-defined set of rules, said Glozman. “This technology is not as scary as you might think,” he said of AI. “You might have already used it.”

Several poll questions were put to readers listening to the webinar. The audience was asked whether their team is spending too much time on administration and not enough time on selling. More than half (58%) of audience members said yes, 20% said no, while 22% said they were not sure or do not know.

RPA involves centralizing administrative tasks and then applying technology to it, said vonWistinghausen.

“We really need to focus on self-service technologies, mobile apps,” vonWistinghausen said of the need for further digital exploration. “It’s no longer 9 to 5. People are juggling taking care of their children while they are working at home. So, from a client perspective, they can’t always get their insurance done during working hours. So they really need these capabilities after hours, and that would also streamline a lot of the administration in insurance as well.”

RPA and AI are not necessarily competitive, Glozman said. “They can work hand-in-hand and are complementary.”

For example, RPA works very well when it has a standardized process, as Glozman explained. Once data is available, a company can put the data into as many downstream processes as it needs, but there has to be that initial kicking-off point of organizing the data. AI can take unstructured data and structure it, Glozman said. From there, “with RPA, you can do millions of things with it.”

“The things you should really be focused on are high-volume, repetitive mundane tasks,” Glozman advised. “Those are the ones where you are going to get the most leverage, because there are some very very unique bespoke tasks that – even though they might be time-consuming – if they only occur a handful of times, it is not the right approach for AI.

“As much as I like AI, AI is not a solution for every problem. It’s a solution that needs to be carefully selected, similar to surgery.”