The Premiers of Quebec and Saskatchewan announced on Thursday that they have agreed to accelerate the development and deployment of technologies related to carbon capture and storage (CCS). 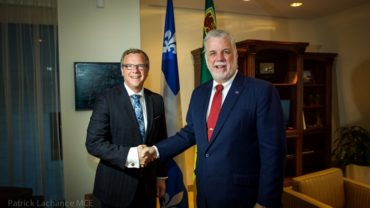 Quebec Premier Philippe Couillard (above right) and Saskatchewan Premier Brad Wall (above left) have agreed to expand their collaborative relationship to further develop the potential of CCS – a technology aimed at enabling major emitters to reduce their greenhouse gas (GHG) emissions. CCS is a technology that “can capture up to 90% of the carbon dioxide emissions produced from the use of fossil fuels in electricity generation and industrial processes, preventing the carbon dioxide from entering the atmosphere,” according to the London, United Kingdom-based Carbon Capture & Storage Association.

The collaboration will contribute to the development of knowledge and best practices to reduce GHG emissions through CCS, while improving the economic return on projects by reusing the captured carbon for other purposes, Saskatchewan’s Executive Council said in a press release.

Besides agreeing to accelerate the development and deployment of CCS technologies, the two provinces will also exchange updates and information on CCS projects and technologies and work together to explore opportunities of further collaborations, notably with the recently established BHP Billiton SaskPower CCS Knowledge Centre.

“We have put in place a cap and trade mechanism in Québec, an instrument recognized throughout the world to fight climate change and reduce GHGs while fostering innovation in green technologies,” Couillard said in the release. “To ensure our prosperity and the competitiveness of our companies, we also need that innovation be introduced in all sectors, especially with new ways to reduce GHGs emitted by production activities.”

Couillard added that “Saskatchewan has expertise in carbon capture and storage that our companies could benefit from. What is good for the economy can also be good for the environment.”

Wall agreed, saying that “Saskatchewan’s leadership in carbon capture and storage shows that we can be part of the global solution in addressing climate change, by focusing on the development of practical technologies, without adversely impacting our economy.”

Over the years, Saskatchewan has developed expertise in carbon dioxide capture and storage methods. For example, SaskPower’s Boundary Dam 3 is the world’s “first and largest coal-fired integrated commercial scale carbon capture system,” Saskatchewan’s Executive Council reported. The dam, which has been in operation since October 2014, provides electricity for 100,000 homes and “does so 10 times more cleanly than other coal units and three times cleaner than a comparable natural gas unit.

Québec is also interested in these technologies and is making significant investments into innovation and research, particularly through its 2013-2020 Climate Change Action Plan, the release said.

As part of Québec’s 2016-2017 budget, $15 million over three years has been specifically allocated for the creation of the Valorisation Carbone Québec valuation consortium, which will bring together provincial public- and private-sector organizations specialized in this field. The mandate of this consortium is to develop and implement “concrete solutions” to capture and reuse carbon dioxide in applications that are crucial to Québec’s economy – the conversion of biofuels, the production of reinforced concrete and enhanced hydrocarbon recovery, in particular.

CCS technology has been recognized by the United Nations Intergovernmental Panel on Climate Change and the International Energy Agency as a tool in achieving the global goal of limiting temperature increases to 2°C.