Ride-hailing is common in many major Canadian cities, but the long-awaited arrival of Uber and Lyft in Metro Vancouver last week has produced lawsuits and a vow by Surrey’s mayor to keep the companies’ drivers off the streets. 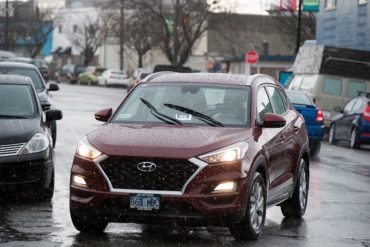 An Uber driver arrives for a news conference after the company launched service, in Vancouver, Friday, Jan. 24, 2020. Ride-hailing companies Uber and Lyft say they are on the road in Metro Vancouver with limited service, less than a day after receiving long-awaited approval for an operating licence. THE CANADIAN PRESS/Darryl Dyck

He says Surrey Mayor Doug McCallum should listen to the wishes of local residents who want free market competition for transportation services.

Michael van Hemmen, Uber’s spokesman for Western Canada, says the company has filed an injunction application in British Columbia Supreme Court to prevent Surrey from issuing fines to its drivers in the city.

But Uber is not the only organization going to court, as the Vancouver Taxi Association has filed petitions alleging unfairness towards the taxi industry and calling for a halt to ride-hailing services.

This report by The Canadian Press was first published Jan. 29, 2020.