This business process is taking too long

Some brokers and carriers are spending too much time and effort dealing with incoming paper, a former auto underwriter says.

While technology advancements mean more forms can be entered electronically through web and mobile apps, brokers nonetheless have data coming to them on snail mail and email attachments, suggested Jeff Hiegert, senior customer advisor for insurance at Hyland Software Inc., in a recent interview.

“The time it takes to get that document scanned, classified and routed to the business unit that is responsible for processing that – it is taking too long because someone has to look at it and say, ‘oh, this is a claim,’” Hiegert said of some insurance providers. 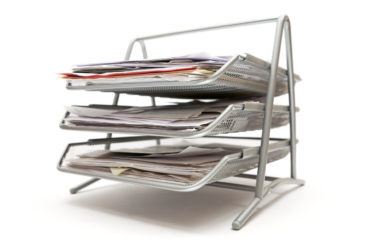 Hiegert was an auto underwriter “many moons ago” but has spent the past 25 years working for technology vendors serving the insurance industry.

Cleveland-based Hyland’s products include Onbase (which does document scanning) as well as software that integrates with policy, billing and claims management systems.

One way of modernizing the paper handling process is to use technology to automatically extract data from a form, suggested Hiegert.

The aim is that paper coming from the mailroom gets scanned and software can figure out where it should go from there. But sometimes this is easier said than done – especially if you are a broker and not all carriers use the same different format for forms – whether they are invoices, claims or applications.

But some software is designed to look at a scanned form and identify what kind of a document it is (a claim or change of address form, for example) by keywords or layout.

In most cases, you can route a document if you know what it is and what it belongs to, said Hiegert. For example, the software might figure out the document is a claim and what policy number it is related to, without a human having to re-key that information in.

When brokers and carriers need to process incoming mail, there are five major steps, said Hiegert.

The first is a “triggering event” – such as a customer has a claim or wants to submit a change of address. At the second step, the information is collected. The third is someone – or a group of people – determine whether or how they are going to perform that process. The fourth is an interaction step. At this stage, the workers communicate with other people, either within the same company or with a different company. The fifth and final step is when the process is executed.

Brokers and carriers might have 15 to 20 different pieces of data they need when a particular type of form comes in.

“If it’s not a brand new customer, a lot of that information already exists in their core policy admin system or claims management system or their ERP or their CRM system – wherever it is they store all the records about their policyholders,” said Hiegert.

“If I can capture a document, and I can identify one or two data elements that I can use to go bounce off the core system or records, I can find the rest of the 15 fields that need to be indexed on this document and pre-fill all of that so the end user doesn’t have to type all of that in.”

3 Comments » for This business process is taking too long