Why near-misses may hold the key to improved road safety

A startup based in Winnipeg is using near-miss data from intersections in an attempt to proactively, rather than reactively, help reduce traffic fatalities.

“Up until now, traffic engineers have focused on using historical crash data that involve a fatality to program interventions,” Craig Milligan, road safety engineer and CEO of MicroTraffic, told Canadian Underwriter Friday. “But if you take a closer look at the data, 75% of fatalities occur at locations where fatalities did not previously occur, which means the reactive approach is clearly not working. 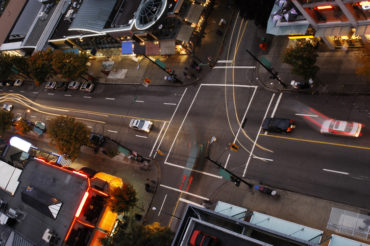 “By giving traffic engineers proactive diagnostics based on serious near-misses, we are able to tell them where the next fatalities are most likely to occur so they can intervene before it’s too late. This is a game changer in traffic engineering that can accelerate changes to the built environment, helping cities reach Vision Zero,” Milligan said, referring to projects that focus on reducing traffic-related fatalities and serious injuries.

MicroTraffic was one of four startups that will participate in the inaugural cohort of the Safe x Connected Cities Accelerator. Venture capital firm Highline Beta and founding partner Aviva Canada announced last month the startups that will receive formal mentorship and pilot opportunities to tackle road safety, mobility and smart city challenges.

MicroTraffic provides new diagnostic data streams to traffic engineers tasked with eliminating traffic fatalities. While many cities already have cameras pointed at intersections where near-misses are happening every day, the information is not getting recorded or turning into action, Milligan said.

MicroTraffic’s analytics are based on a software tool that automatically detects and traces the path and speed of vehicles, pedestrians and bicycles. From these trajectories, the tool automatically identifies near misses – where two paths nearly collide at speeds high enough to produce a serious injury.

If the rate of near misses is abnormally high for a particular vehicle movement or pedestrian crossing, the government can proactively intervene to change the signal timing, add signs, or even reconfigure the physical layout of the intersection, Milligan explained. To date, 35 governments have programmed more than $200 million of road safety improvements using MicroTraffic’s diagnostic technology (and this only represents pilot projects).

Milligan said Aviva and Highline Beta are working towards the same road safety objectives as MicroTraffic, and they have real expertise in data science, innovation and marketing. “Aviva will be lending us some of their expertise in the hopes of accelerating our impact and success as a startup,” Milligan said. “This is super helpful because in startups, things are often chaotic and not all pieces are in place. Leaning on guidance from a large corporation with full structure and teams in place can have a transformative impact.”

Milligan reported that they are still finalizing what the pilot will look like with Aviva, but are looking forward to working closely with the mentors from the program. “As we draw on the expertise from mentors and Aviva’s relationships within the road safety space, we also hope that our scientists and engineers can return the favour and stimulate some progress and new ideas for Aviva’s road safety initiatives.”

Over the next six months, Highline Beta and Aviva Canada will work closely with the selected startups to provide mentorship, develop proof concepts and pilot their solutions, Aviva said in a press release Jan. 7. Results of these pilots will be shared later in 2020.

Besides MicroTraffic, the other startups selected for the Safe x Connected Cities Accelerator include: