Digitizing your brokerage? Pay attention to the ‘frozen middle’

The key is to get buy-in from the lower levels of the organization, said Paul Chapman, chief information officer (CIO) at Box Inc., a provider of cloud content management and file-sharing service for businesses. 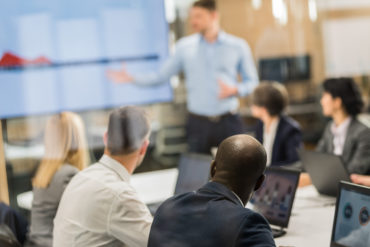 “The tricky part is not the leadership themselves, they can get aligned,” Chapman said in an interview. “It’s the next level down, and the next level down.” This is what he calls the “entrenched inertia, the resistance, the frozen middle.” In this part of the company, it’s hard to inject enough tension to cause it to react and change, he said.

“In some ways, you have to break the existing culture of the company,” Chapman said, noting that the entire organization’s culture needs to change en masse, not just in one department.

So, what’s the key to transformation? Is it technology? Technology enables disruption, but it’s not what causes the disruption itself, Chapman stressed.

“There’s no exact silver bullet that says if you follow this prescribed set of steps, this is how it happens,” Chapman said. “But I do for sure know that you really have to think through the operating model, the business model and the cultural aspect. Companies that have been successful have focused on the ‘how’ part – they’ve figured out how to reorganize themselves. Sometimes, it’s new leadership. Sometimes it’s a different engagement model internally.”

Chapman spoke to Canadian Underwriter following his presentation at the Gartner IT Symposium/Xpo, held from June 3 to 6 in Toronto.

Historically, companies have been “optimized to win in an industrial economy” by incrementally changing their business model, he said. “The challenge today is that the disruption is now being fueled by a combination of mobile ubiquity, the networked economy, the ability to connect your employees, partners, customers, etc. all over the world” combined with “best-of-breed” services, Chapman said.

“You can’t continue in a step-wise, linear way, incrementally making changes to your existing business model,” he added. “You have to build a new business model from the ground up and that’s really, really hard.”

Chapman used the example of a CIO who was struggling to overcome transformational challenges when everything was placed on his shoulders. “That changed almost overnight when they had a new CEO who said, ‘If we are going to think and behave and operate like a technology company, then I need every one of my business leaders… to think and behave like technology leaders. You need to define what your partnership model with the CIO is.’”

Should the CIO be the one to lead the transformation? While they are the best to partner with different lines of business to transform their areas, they are probably not the best to lead the transformation as it requires organizational and culture change, Chapman said. “I don’t know about other CIOs, but I never went to school and got my PhD in changing organizational culture,” he said with a laugh.