Toronto-based Catastrophe Indices and Quantification Inc. (CatIQ) announced that they have entered into an agreement whereby Impact Forecasting’s cat event response flood footprints for Canada will be made available as a layer on CatIQ’s CatHUB module. 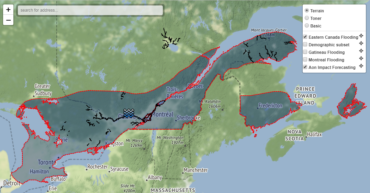 Impact Forecasting’s cat event response flood footprint for Canada will be made available as a layer on CatIQ’s CatHUB module. Photo credit: CatIQ.

Laura Twidle, director of catastrophic loss analysis with CatIQ, told Canadian Underwriter that the CatHUB module provides detailed analytical information on Canadian natural and man-made catastrophes for the insurance industry dating back to 2008. The information includes industry estimates, meteorological information (if applicable) and a footprint outlining where the damage and insured losses have been reported, among other items.

Twidle noted that talks for the agreement were ongoing over the past six months. “It was acknowledged that there could be potential synergies between the two companies to add value to our users by including Impact Forecasting’s flood footprints as an additional layer on CatHUB,” she said, adding that “it should be noted that there is no corporate deal between the two companies.”

Related: Flooding expected to be ‘unlike anything ever seen,’ warns Kelowna mayor

Steven Bowen, head of catastrophic insight at Impact Forecasting, said that the company has been implementing a real-time modelling solution through its cat event response initiative since 2015. “We have released footprint scenarios for major events (including perils such as flood, tropical cyclone, European windstorm and earthquake) in the United States, Europe and parts of Asia in the past two years and are excited to now include Canada flood as part of our real-time product suite,” he told Canadian Underwriter. “These footprints are available to Impact Forecasting subscribers and are being widely used, especially by insurers and reinsurers for early loss estimates and impact assessment.”

Impact Forecasting’s Canada flood model was released in 2015 and the eastern Canada flood event from May 2017 was the first Canada-related flood event modelled. “Partnering with CatIQ was a natural move to help share our unique view of modelling beyond our own external support website,” Bowen said.

Impact Forecasting’s cat event response footprints provide a detailed view on the inundation from rivers (flood plain) and areas with the high risk of sewage back-up and sub-surface water flooding (off-flood plain). “The footprints are modelled using state-of-the-art technology, exploiting high resolution digital terrain model and 2D hydrodynamic model, combined with discharge observations in order to provide realistic picture of the flooded areas,” Bowen explained. The footprints are available in the form of flood outline and detailed datasets, including information about flood depth in high resolution.

For their part, CatIQ’s flood footprints include areas that were also flooded due to heavy rain, such as basement seepage and sewer back-ups, and “serve as a high level guidance where the claims could be expected,” Twidle added.

The agreement between CatIQ and Impact Forecasting comes about six months after CatIQ entered into a strategic alliance with PERILS – the independent Zurich, Switzerland-based organization that provides industry-wide catastrophe insurance data – to provide industry loss data for Canada.

Under the strategic alliance, PERILS makes available via the PERILS Industry Loss Index Service industry loss data for any nat cat event in Canada causing a market loss of $300 million or more, including earthquakes, floods, storms, wildfires and volcanic eruptions. The loss data is made available by province and by the following lines of business: private property, commercial property and motor hull (auto).