Flooding expected to be ‘unlike anything ever seen,’ warns Kelowna mayor

VANCOUVER – British Columbia’s Okanagan region is bracing for a storm that Kelowna’s mayor worries could unleash the worst flooding the region has ever seen. 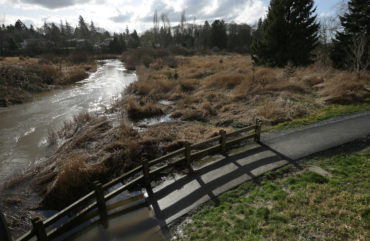 Mayor Colin Basran posted a Facebook statement describing expected water levels as “unlike anything we have ever seen in our community.”

The regional district issued a news release early Thursday advising residents that the risk of flooding within hours was very high.

It said people in low-lying areas such as the Okanagan Lakeshore or Kelowna’s downtown core should take measures to protect their properties.

“A combination of rain and spring snow melt over the next few days will lead to rising water levels, likely to peak later (Thursday) and will increase the risk of flooding,” the release said.

Suburban and rural planning manager Todd Cashin said reservoirs around Kelowna are full, the ground is saturated and all area lakes are at capacity.

“Our cup is full, the bucket is full, there’s really nowhere more for the rain to go except over creek banks and up onto people’s properties along our lakes,” he said.

Basran warned that many people could be displaced in the hours and days ahead and urged residents in unaffected neighbourhoods to consider taking in friends or family who have been forced from their homes.

“This is the time now where, as a community, we need to come together and look after each other,” he said.

The River Forecast Centre posted a flood watch for the Salmon River in Shuswap, while high streamflow advisories cover most waterways across the southern and southeastern parts of the province.

High streamflow advisories are also in place for northern parts of the province, including the Bulkley Valley, northeast B.C., and the Peace region.

Environment Canada warned storms packing up to 70 millimetres of rain are expected by Friday and could drop a further 20 to 30 millimetres across northern regions by Saturday.

Severe thunderstorm watches were issued for parts of the central and southern Interior, with the potential for strong winds, large hail and heavy rain.

That has added to the concerns of hundreds of residents on evacuation order and thousands who have been told to be ready to leave home on short notice.

Basran said even residents far from swollen rivers and streams should be prepared.

Residents across the southern Interior have been urged to prepare an emergency kit containing enough supplies to last 72 hours.