Insured losses from Harvey’s wind, storm surge as much as US$2.3 billion: AIR Worldwide

Harvey-related winds and storm surge in Texas are expected to produce industry insured losses amounting to between US$1.2 billion and US$2.3 billion, AIR Worldwide reported Monday afternoon as flooding in southeastern Texas continued to strand residents and wreak havoc. 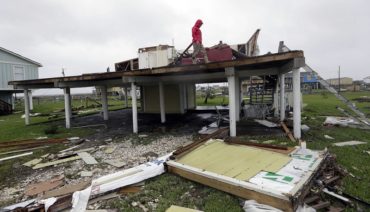 Evelyn Perkins inspects her home which was destroyed in the wake of Hurricane Harvey, Monday, Aug. 28, 2017, in Rockport, Texas. (AP Photo/Eric Gay)

The initial estimate does not include the impact of the ongoing torrential rain and catastrophic flooding from Harvey’s unprecedented precipitation – which are expected to be significant – or things like business interruption losses related to oil refinery closures, the catastrophe modelling firm adds.

Citing information from the National Hurricane Center (NHC), Harvey’s winds at landfall near Rockport, Texas on Friday night were approximately 130 mph, hurricane-force winds extended 40 miles from the centre, and storm surge was estimated at six to 12 feet. Category 4 windspeeds weakened and Harvey was downgraded to a tropical storm the following day, AIR Worldwide reports.

In Rockport, about four miles west of the landfall location and just east of Corpus Christi, wind damage was severe. Masonry walls collapsed, wood frame homes were shattered, roofs and metal siding were peeled off, mobile homes were overturned, and trees were uprooted, the statement notes.

In Corpus Christi, downed trees, debris and power lines blocked roadways, signs were blown down, and some roofs were at least partially torn off, AIR Worldwide states. That said, incidents of direct structural damage were limited, the firm adds.

In 2003, AIR Worldwide reports that most cities of Texas adopted modern building codes to reflect improved wind load design provisions for the building envelope. And a year later in 2004, the legislature mandated that all commercial structures started after January 1, 2006, meet the requirements of the International Building Code statewide.

Beyond wind-related damage is the more severe losses anticipated from flooding. “Harvey has already unleashed catastrophic and unprecedented flooding in southeastern Texas, and these conditions are expected to last for several more days,” Eric Uhlhorn, principal scientist at AIR Worldwide, said in the statement Monday.

Media reports out of Houston indicate that many citizens have been stranded by flood waters and emergency personnel are heavily taxed.

With reports that Houston has received almost three feet of rain so far, notes a statement Monday from the Insurance Council of Texas (ICT), “travel in and around Houston, the country’s fourth largest city, is almost impossible.”

Evacuations of thousands of residents are continuing to occur along a 200-mile stretch from La Grange to Beaumont, ICT reported at the time.

Agellan Commercial Real Estate Investment Trust (REIT) reported Monday that it has been advised by its local Houston property management that one of its Houston industrial properties has likely experienced flood-related damage.

REIT – which has 44 properties in major markets in Canada and the U.S., including three offices and nine industrial properties in Houston – is unable to assess the full extent of the damage “due to the difficulties of traversing the region at this time,” notes a statement from the trust.

“However, any flood-related damages are expected to be covered under the REIT’s property insurance policies, which are subject to certain exceptions and deductibles. In addition, tenants of the REIT are required to maintain property and business interruption insurance policies pursuant to the terms of their leases with the REIT.”

AIR Worldwide points out that by Monday morning, 24.44 inches of rain had fallen at Bush International Airport in Houston, where a new daily rainfall record was broken with 16.07 inches falling in one day. Current rainfall totals range from 15 to 30 inches across the entire region, the firm adds.

As of Monday afternoon, “the storm is forecast to turn northeastward, potentially making a second landfall near Houston later this week,” AIR Worldwide reports.

“While some strengthening is possible, forecasters at the NHC currently do not expect Harvey to achieve hurricane status as it lacks an organized core and is encountering strong southwesterly wind shear,” the statement notes. “An additional 10 to 20 inches of rain are expected between now and Friday September 1,” it adds.

“As a result of the unprecedented rainfall that has fallen in Houston and its surrounding areas, 66 of the 120 river gauging stations of the National Weather Service in Houston and Galveston are currently at various stages of flooding,” Uhlhorn points out. The expectation is that by September 2, 74 of the gauging stations will have flooded, approximately 50 of which will experience major flood stages, he says.

ICT reports that widespread damage in southeast Texas prompted the governor to declare a State of Disaster for 54 Texas counties. “It is the worst flooding we have ever seen and the fact that it is occurring over a heavily populated area, makes it that much worse,” ICT spokesperson Mark Hanna says in the statement.

“The state remains in a search-and-rescue mode of operation until the flood waters subside and we’re not sure when that is going to take place,” Hanna notes.

ITC reports that “catastrophe teams from insurance companies are standing by in strategic locations ready to move in to assess the damage to areas that have been hardest hit. Insurance adjusters will be dealing with an overwhelming number of homes, businesses and vehicles that have been damaged by wind or flooded.”