Mobile earthquake simulator to visit Quebec in May and June

The Insurance Bureau of Canada (IBC) is inviting Quebecers to experience the Quake Cottage, a mobile earthquake simulator, this month and next. 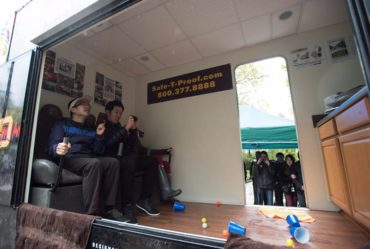 People experience what an earthquake would feel like as they sit inside an earthquake simulator in Vancouver, B.C. Tuesday, May 5, 2015. THE CANADIAN PRESS/Jonathan Hayward

As part of its earthquake preparedness campaign, IBC will be touring Quebec cities and shopping centres from La Malbaie to Gatineau between May 6 and June 4, IBC said in a press release on Wednesday.

The main objective of the event, held for the second year, is to “get the message out to as many people as possible, so that everyone knows what to do if the earth starts to shake,” IBC said in the release. “Eastern Quebec averages about 450 quakes each year, with Quebec likely to experience a major quake in the future.”

Those trying out Quake Cottage will experience a 30-second quake measuring 7.0 on the Richter scale. “While Quebec does have smaller quakes, the province has already experienced a quake as strong as the one simulated by Quake Cottage, and this is what we need to prepare for,” IBC said.

“Through this simulation, we want to explain to people that they can expect to face lots of upheaval if a major quake were to occur, and they must learn to protect themselves,” said Pierre Babinsky, director of communications and public affairs at IBC.

The Canadian Red Cross said in the release that it supports and welcomes the earthquake awareness activity. “The Red Cross encourages all families to familiarize themselves with the kind of emergencies that can happen in their community, have a plan and a 72-hour emergency kit, so that they can be self-sufficient if they have to evacuate or can’t leave their home,” noted Claudie Laberge, director of the Canadian Red Cross’ Emergency Management Service.

The Quake Cottage will visit these locations on the following dates:

Last April and May, the Quake Cottage visited 34 municipalities in British Columbia as part of the IBC ShakeZone tour, simulating a magnitude 8.0 earthquake.