Gross losses accrued in the National Flood Insurance Program (NFIP) from Hurricane Harvey will be between US$7-10 billion, Pete Dailey, vice president of product management with Risk Management Solutions, Inc. (RMS), suggested in a blog posted on Friday. 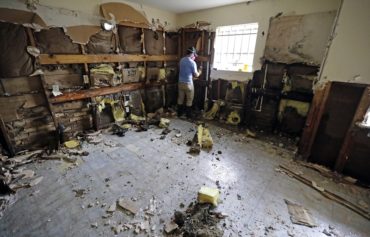 Volunteer Brock Warnick removes drywall and insulation from the home of Julia Lluvia which was damaged by floodwaters in the aftermath of Hurricane Harvey Monday, Sept. 4, 2017, in Houston. (AP Photo/David J. Phillip)

About 40% of those claims are expected to come from Harris County alone, an area whose county seat is Houston. The estimate uses anonymized data obtained in 2015 following a Freedom of Information Act request related to NFIP’s exposures, RMS reported.

“With NFIP up [this] month for reauthorization and reform, this is an important point – and not just for the 25 reinsurers underwriting over US$1 billion of NFIP’s claims,” Dailey wrote.

Given the extent and duration of inundation, it is not unreasonable to assume an average paid loss of US$65,000, the blog noted. For context, this figure is consistent with the mean claim NFIP paid out for Superstorm Sandy. But because of the anonymized nature of the exposure data received under the freedom of information request, it is unclear how many of the NFIP’s policies are likely to have been impacted by Harvey. “However, taking our US$7-10 billion modelled loss dividing by the assumption of a US$65,000 mean average claim, the program will receive approximately 100,000 to 150,000 claims from this catastrophic event,” Dailey estimated.

To put the loss into perspective, Dailey considered the history of events that have materially impacted NFIP’s profitability. “Assuming our estimates are reasonably accurate, it seems clear that Harvey will be a top three loss event for the program,” Dailey wrote. “While it appears unlikely the NFIP’s losses in Harvey will be as great as those sustained as a result of Hurricane Katrina (2005), there is no reason to assume that they will not be as large if not larger than those from Superstorm Sandy (2012).”

NFIP provides taxpayers in the United States with a little over US$1 billion of protection, the blog said, noting that this level of protection only kicks in once the NFIP has paid US$4 billion in claims. The program then sees the Federal Emergency Management Agency sharing the cost of claims with the private market up until it has paid out US$8 billion.

“Based on RMS estimates that the gross insurance losses accrued in the NFIP will be between US$7-10 billion, it’s quite obvious that the reinsurance program is going to be activated,” Dailey pointed out. “It seems NFIP’s efforts to diversify risk into the global risk transfer market are starting to pay off,” he concluded.

In another blog on Sept. 1, two RMS officials noted that while assessing the full extent of the impact of Harvey to the marine cargo industry may take several months, losses for static goods at inland warehouses at the Port of Houston may not be limited, as has been the cases for transit-related losses. “Considering cargo values and dwell times – how long cargo spends in port due to processing and customers – RMS estimates that the Port of Houston has an average of US$7.6 billion in cargo at risk on a daily basis,” the blog said. RMS also estimates that the average daily value of US$2.4 billion in bulk cargo is at risk, consisting of break, dry and liquid bulk commodities. As well, more than US$3.5 billion worth of petroleum and related exposure is at risk at any given time, although most of this is stored in tanks designed to withstand significant wind loads and flood depths.

“In time though, the industry will see if it has learnt from recent large marine cargo losses in Tianjin and Sandy, to introduce measures to improve packaging, risk mitigation and cargo protection,” the blog stated.

On Aug. 30, preliminary estimates from RMS suggested that economic losses caused by wind, storm surge and inland flood from Harvey could be as high as US$70-90 billion. The estimate – including damage to all residential, commercial, industrial and automotive risks, as well as possible inflation from area-wide demand surge – noted that the majority of the overall loss is likely to be from inland flooding in the Houston metropolitan area, where there are over seven million properties representing more than US$1.5 trillion in value.

The Associated Press estimated on Tuesday that about 7,000 homes have already been destroyed in Texas, while more than 37,000 homes have been heavily damaged. Harvey is also blamed for at least 60 deaths confirmed in 11 counties in the state.