Economic losses from Hurricane Harvey could be as high as US$70-90 billion: preliminary RMS estimate

Economic losses caused by wind, storm surge and inland flood from Hurricane Harvey could be as high as US$70-90 billion, according to preliminary estimates from Risk Management Solutions, Inc. (RMS). 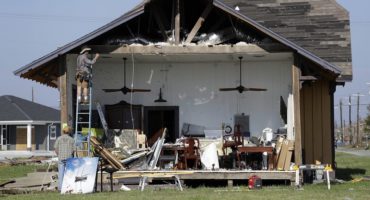 Workers begin repairs to a wall that was lost in the wake of Hurricane Harvey, Wednesday, Aug. 30, 2017, in Rockport, Texas. (AP Photo/Eric Gay)

The Newark, Calif.-based global risk modelling and analytics firm said in a press release on Wednesday that the majority of the overall loss is likely to be from inland flooding in the Houston metropolitan area, where there are over seven million properties representing more than US$1.5 trillion in value.

The estimate includes damage to all residential, commercial, industrial and automotive risks in the area, as well as possible inflation from area-wide demand surge.

Considerable uncertainties around final losses remain, as the flooding is still ongoing and will take some weeks to come to an end. RMS also emphasized that the preliminary analysis of potential economic loss will be updated and stressed that “today’s announcement is not the RMS official insurance loss estimate.”

Related: Insured losses from Harvey’s wind, storm surge as much as US$2.3 billion: AIR Worldwide

The component of the overall economic loss caused by wind and sea storm surge continues to be very modest in the assessment, because the storm did not affect the most highly-developed coastal areas, RMS explained. Initial recreations of the hurricane suggest less than 10% of the economic loss will be driven by wind and storm surge damage to property and offshore platforms.

“Hurricane Harvey has already broken all U.S. records for tropical cyclone-driven extreme rainfall, with observed cumulative amounts of 51 inches,” Michael Young, RMS head of Americas climate risk modelling, said in the release. “And with the rain still falling heavily and the waters rising, the situation is too fast-moving to be stating with certainty what the losses in Texas could be. We have used the power of the new RMS U.S. High Definition Flood Model to give valuable, preliminary insights to our clients. It will be followed by an official insurance loss estimate in the coming weeks.”

The models project that the overall economic loss will be US$70-90 billion and the majority of these losses will be uninsured, given that private flood insurance is limited. However, although the insured losses will remain uncertain for some time, “they will be significant, as private coverage is not consistent: there are significant variations in how coverage is provided by individual insurers.”

Coverage for some of the residential losses has been provided by the National Flood Insurance Program (NFIP), the release said, noting that there are approximately 500,000 NFIP policies that will be affected by Harvey, “and the losses to the program will be very significant – potentially the largest event to date.” But NFIP penetration rates are as low as 20% in the Houston area and most of the losses will be uninsured and “this will rekindle the public policy debate around this issue.”

The Associated Press reported on Thursday that the confirmed death toll from the hurricane climbed to at least 31. Altogether, more than 1,000 homes in Texas were destroyed and close to 50,000 damaged, with more than 32,000 people in shelters across the state.