Open roads: Driving “fast and furious” during the pandemic

Ontario Provincial Police caught two different drivers this past weekend going more than twice the speed limit on highways, part of a growing trend of dangerous driving on the open roads during the pandemic — and insurers are taking notice.

One driver in Toronto was clocked at a whopping 308 km/h on the QEW highway, while another was caught driving 207 km/h on Highway 403 (both highways run west of Toronto with speed limits of 100 km/h). The two vehicles ran afoul of the province’s stunt driving laws, meaning the licences of both 19-year-old drivers were suspended for seven days; their vehicles were impounded for the same amount of time. Such penalties are issued when drivers are caught speeding more than 50 km/h over the legal limit.

A visibly annoyed Sgt. Kerry Schmidt of the OPP’s Highway Safety Division posted a 13-minute video to social media, saying 308 km/h was the fastest he’s heard of a vehicle travelling and that the incident was “beyond words.” 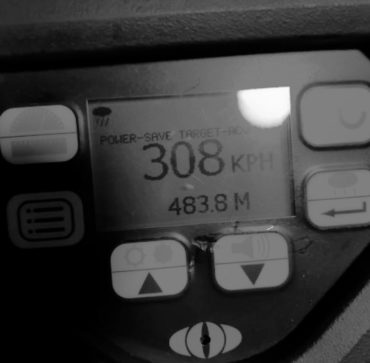 OPP’s Highway Safety Division shared this image of a radar gun capturing the speed of one driver.

Police across the country have seen a similar trend of driving fast and furious on the open roads during the pandemic. According to the OPP, there have been 150 violations of the stunt driving law since May 1, continuing a trend that started last month. Schmidt told Canadian Underwriter that there was 358 stunt driving offences in April — a 26% increase from the same month last year.

In Toronto, those numbers are more eye-popping. Since Mar. 23 (the end of the first full week that most people started working from home to prevent the spread of coronavirus) until the end of April, Toronto Police Service reported 222 stunt-driving offences — a 594% increase. Speeding infractions (at 6,908 offences) are up 25% over the same amount of time.

While stats were not available, RCMP in British Columbia said they’ve recently noticed more speeding tickets being handed out by its members. Over the Easter long weekend, one of its divisions reported that 41 vehicles were impounded and ticketing the same amount of drivers for excessive speed. Furthermore, the Vancouver Police Department shared the image of one vehicle being towed after it was clocked going 93 km/h in a 30 km/h zone at the end of April.

Stay-at-home orders due to the COVID-19 pandemic have reduced road traffic. “As a result of that, we’re seeing lighter traffic volumes and individuals are taking advantage of the open roads — driving faster and putting themselves and others around them at risk,” Sgt. Jason Kraft with Traffic Services at Toronto Police Service told Canadian Underwriter.

“With less traffic on our highways, people’s behaviour in terms of speeding/excessive speed seems to have increased, at least anecdotally,” Cpl. Mike Halskov of BC RCMP Traffic Services said in an e-mail.

“The overall reduction of vehicle volume has provided more opportunity for those with a propensity to speed to do so,” said Tarjinder Bhullar with Calgary Police Service’s public affairs and media relations unit, adding that some motorists have been ticketed for driving “well above the [speed] limit.”

Police in Vancouver said they haven’t noticed an uptick in speeders, while police in Edmonton, Ottawa, Montreal and Newfoundland didn’t respond to media requests.

The increase in speeders comes as collisions drop dramatically. Schmidt reported a 60% drop in collisions in April compared to last year. In Toronto, since the pandemic started, Kraft said collisions are down nearly 80%. While final April numbers weren’t available, Halskov said fatal collision numbers look to be down more than 50% in B.C.

“This temporary increase in unsafe driving, just like a temporary decrease in driving in general, will get taken into account as we calculate the appropriate premiums.”

These numbers are behind the public’s push for insurers to offer rebates. Most have responded with some form of relief measure. But the increase in traffic violations may not just negate any discounts, it would push rates higher for drivers, insurers warned.

“As an insurer, we are strong advocates of safe driving. Safer roads and safer drivers help to stabilize rates,” a spokesperson from Intact told Canadian Underwriter. “Insurance premiums reflect individual risk characteristics, based on each insurer’s rating algorithm.”

Road safety is also top of mind at Aviva Canada. “Safe driving is an easy way for drivers to ensure they save money on insurance (and tickets),” said Phil Gibson, managing director of personal insurance. “This temporary increase in unsafe driving, just like a temporary decrease in driving in general, will get taken into account as we calculate the appropriate premiums. For now, we are closely monitoring to see which are short-term changes versus which become long term trends, so that we respond responsibly.”

Kraft noted that with fewer collisions, police have more time for traffic enforcement. “There are officers that are out there all day long, all hours of the day, every day of the week, throughout Toronto doing traffic enforcement activities to address those individuals taking advantage,” he said.

There’s a lot more risk for a collision when speed is involved, Schmidt said in his video. A driver making a lane change on the same road as the driver going 308 km/h — almost 300 feet per second — wouldn’t see that car coming when they looked in their side mirror for, say, a lane change. At best, they’d be lights off in the distance. “By the time this driver is coming up on them, they may not even have the ability to adjust their driving — change lanes, slow down, hit the brakes, anything — to avoid a collision,” Schmidt said. “This could have turned into the most devastating fatal crash ever.”