A tropical moisture system resulting from Hurricane Matthew that swept through Atlantic Canada last month has resulted in over $100 million in insured damage, according to Toronto-based Catastrophe Indices and Quantification Inc. (CatIQ). 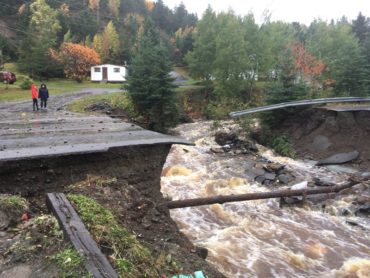 The effects of the tail end of Hurricane Matthew are shown in this images from Norris Arm, Newfoundland on Tuesday October 11, 2016. Communities in Nova Scotia and Newfoundland are facing a costly cleanup from widespread flooding damage after a storm brought torrential rain to the region over the long weekend. THE CANADIAN PRESS/Paul Daly

A cold front interacting with Matthew’s tropical moisture resulted in a low-pressure system that quickly intensified and brought hurricane strength winds and intense rainfall to parts of Atlantic Canada, the Insurance Bureau of Canada (IBC) said in a press release on Friday.

Most damage was reported to have occurred in Nova Scotia. The storm stalled as it passed over that province and caused significant flooding on Cape Breton Island. Sydney, N.S. received close to 225 millimetres of rain in a single day, shattering the city’s previous single day record of 129 mm, IBC reported.

On Oct. 11,  The Canadian Press reported that thousands of homes and businesses across Atlantic Canada were without electricity due to heavy rain and strong winds that lashed the region on Thanksgiving Monday. Well over 61,000 customers across Nova Scotia were without power early that day, with about a third of them in the Sydney area.

“This storm was one of the most devastating we have seen in recent memory,” said Amanda Dean, vice president, Atlantic, with IBC. “The flooding caused by this system was a sobering reminder of the power of Mother Nature and the impacts that severe weather can have on our communities.”

Flooding and related sewer backup damage is costly for homeowners, businesses, municipalities and insurance companies. From ensuring that important documents are not stored in a basement to installing a sump pump, there are many ways to be proactive, IBC said, such as:

“Canada is the only G7 country without a national strategy to deal with overland flooding,” added Dean in the release. “The Atlantic floods demonstrated that, despite new overland flood insurance coverage being increasingly available to homeowners, there is a need for coordinated action. More remains to be done and all stakeholders have a role to play.”

IBC and Canada’s property and casualty insurers continue educating consumers about coverage options, and working with federal and provincial government officials “to ensure every Canadian has access to adequate financial protection. Addressing these gaps in public policy and consumer protection can only be possible if industry and government work together to implement a national flood program,” IBC concluded.