The Lloyd’s market has now paid almost three quarters of a billion dollars (US$738 million) in response to Hurricanes Harvey, Irma and Maria, the world’s specialist insurance market said on Thursday. 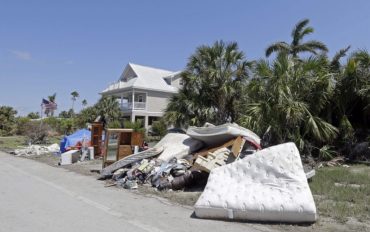 A pile of debris caused by storm surge during Hurricane Irma, Monday, Sept.18, 2017, in Everglades City, Fla. The isolated Everglades City community of about 400 people suffered some of Florida’s worst storm surges, up to 9 feet (2.7 meters), when Hurricane Irma slammed the region eight days ago, leaving the insides of homes a sodden mess and caking the streets with mud. The storm affected nearly every part of the state, and more than two dozen people were killed. (AP Photo/Alan Diaz)

“When you get three catastrophic weather events as well as earthquakes in Mexico and flooding in Asia all happening so close to each other, it’s essential to make sure the market’s claims response moves as quickly as possible to help people rebuild their lives,” Lloyd’s performance management director Jon Hancock said in a press release on Thursday.

Also on Thursday, S&P Global Ratings said that it revised its outlook on the Society of Lloyd’s to negative from stable. Lloyd’s has announced an estimate of net losses of 3.3 billion pounds from Hurricanes Harvey and Irma, S&P said in a statement, adding that Lloyd’s also expects further major losses from Hurricane Maria and other potential cats in Q4 2017. “The negative outlook reflects our expectation that the market will produce a combined (loss and expense) ratio of about 95% in 2018-2019,” the statement said.

In another statement on Friday, S&P said that “losses from these hurricanes, as well as the Mexico City earthquake that took place during third-quarter 2017, will likely wipe out global reinsurers’ annual earnings and ultimately become a capital event for this sector. Reinsurers are also nervously watching the remainder of the Atlantic hurricane season and the California wildfires.”

As for Lloyd’s, Hancock said that it has made advance payments on a range of reinsurance programmes for local insurers to make sure they have the funds to pay claims locally – both in Texas and the Caribbean. “Lloyd’s has also made advance insurance payments to businesses so that they have funds to kick start re-builds and get back on their feet,” he said in the release. “In one case, Lloyd’s advanced tens of millions of dollars to a Florida Keys hotel chain within days of it suffering severe storm damage. This has enabled that business to begin repairs so that it can resume business as quickly as possible. Imagine what a relief that is for this company trying to get their business up and running again.”

Lloyd’s continues to evaluate the situation and process claims as they come in, the release added.

Hamilton, Bermuda-based holding company Everest Re Group, Ltd. said on Thursday that it expects to incur pretax catastrophe losses, net of reinsurance and reinstatement premiums of US$1.2 billion, with a net economic impact of US$900 million after taxes. The estimate includes losses from Hurricanes Harvey, Irma and Maria, as well as losses from earthquake events in Mexico. “The company’s view of its losses from these events assumes an aggregate industry loss in the range of US$100 billion for the quarter and is based on a combination of modelled information, underwriter analysis, preliminary client discussions and a profile of exposed limits within the affect regions,” Everest Re said in a statement.

Also on Thursday, AXIS Capital Holdings Limited – a Bermuda-based global provider of specialty lines and treaty reinsurance – reported its preliminary estimate of the total net financial impact from third quarter 2017 cat losses at US$578 million, net of tax and estimated recoveries from reinsurance and retrocessional covers, and including the impact of estimated reinstatement premiums. The estimate is primarily based on its ground-up assessment of losses from individual contracts and treaties exposed to the affected regions, including preliminary information from clients, brokers and loss adjusters.

And Arch Capital Group Ltd. said that the company’s 2017 third quarter results will be negatively impacted by a set of cats that occurred during the third quarter, including Hurricanes Harvey, Irma and Maria, along with the Mexican earthquakes and other minor global events. “We have established an after-tax preliminary range of US$285 million to US$345 million for the totality of these catastrophic events across our operating segments, net of reinsurance and reinstatement premiums,” Arch Capital said in a release on Thursday. “Due to the mix of estimated catastrophic losses by jurisdiction, we anticipate the tax rate applicable to these catastrophic losses to be lower than our effective annual tax rate on pre-tax operating income. The company determined a range for total industry insured losses across all 2017 third quarter events of US$80 billion to US$100 billion.”

The assessment is based on currently available information derived from modelling techniques, industry assessment of exposure, preliminary claims information obtained from the company’s clients and brokers to date and a review of in-force contracts.