XL Group Ltd. reported on Wednesday a preliminary estimate of approximately US$1.33 billion relating to Hurricanes Harvey, Irma and Maria. 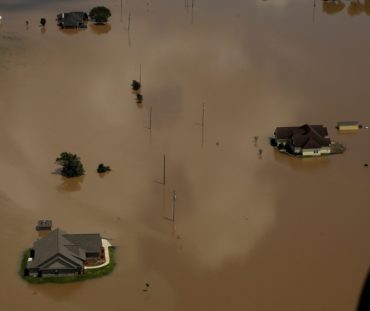 In this Sept. 1, 2017 photo, homes are submerged by water from the flooded Brazos River in the aftermath of Hurricane Harvey near Freeport, Tex. It’s not just this year. The monster hurricanes Harvey, Irma, Maria, Jose and now Lee that have raged across the Atlantic are contributing to what appears to be the most active period for major storms on record. (AP Photo/Charlie Riedel)

For the third quarter of 2017, total catastrophe losses, including smaller loss events, are preliminarily estimated at approximately US$1.48 billion. These preliminary estimates are pre-tax and net of reinsurance, reinstatement and adjustment premiums and redeemable non-controlling interest. On an after-tax basis, the preliminary estimate of total cat net losses for the quarter is approximately US$1.35 billion, XL said in a press release on Wednesday.

XL noted that the company’s preliminary estimates are based on a combination of catastrophe modelling, exposure analysis and preliminary ground-up notifications and are consistent with private insured market loss estimates for Hurricanes Harvey, Irma and Maria in the range of US$75 billion to US$90 billion. Hurricanes Harvey, Irma and Maria each contributed approximately 25%, 40% and 25%, respectively, to the company’s loss estimates, with 10% related to all other events in the quarter, most notably the Mexican earthquakes and Typhoon Hato, which struck south China in August.

The estimated losses are approximately evenly split between the XL’s Insurance and Reinsurance segments. “Following these events and meaningful reinsurance recoveries this quarter, the company continues to have significant catastrophe reinsurance protections remaining for 2017 and 2018, including catastrophe bond protections, some of which extend through 2019,” the release said.

Mike McGavick, XL’s chief executive officer, said that “as ever, the problem of underinsurance is again laid bare, afflicting especially those already less well off. In terms of the effects on XL itself, given the specific nature of the events themselves, our estimated losses are largely in line with our expectations, and our capital strength and talented teams ensure that we remain positioned to continue solving the risk needs of clients and brokers. As for market conditions, risk awareness has changed due to these events, and this in turn should cause the market to move towards more realistic and sustainable pricing for the risks undertaken.”

XL emphasized in the release that “given the complexities and the nature of these particular events, including the magnitude, proximity and recent occurrence of these events, limited claims data received to date, the likelihood of longer development periods associated with the specific characteristics of these events, the geographic and infrastructure limitations related to the areas impacted and factors inherent in loss estimation, among other matters, there is considerable uncertainty associated with these loss estimates, and as such, they are accordingly subject to revision as additional information becomes available. Actual losses may differ materially from these preliminary estimates.”

Also on Wednesday, Markel Corporation – a financial holding company for global insurance, reinsurance and investment operations – estimated its third-quarter cat losses for the three hurricanes and the Mexico earthquakes. Markel reported that it expects to report third-quarter pre-tax underwriting losses of US$503 million, net of reinstatement premiums, from these events.

Markel’s estimate for the hurricane and earthquake losses is based on claims received to date and detailed policy level reviews, industry loss estimates, output from both industry and proprietary models as well as a review of in-force contracts. The company noted in a statement that its estimate is “preliminary and dependent on broad assumptions about coverage, liability and reinsurance. Accordingly, the company’s actual net losses from these events may differ materially from this estimate.”

“These significant losses fell within our expectations,” Markel’s Co-CEO Richard R. Whitt III said in the statement. “At Markel we are well-positioned with our strong balance sheet to respond to the claims of our insureds.”

More News
Related
Mexico earthquake and three hurricanes could cost the industry US$95 billion: SCOR
Some reinsurance programs ‘have been called upon four or five times’ in 2017: CMS
Zurich estimates net claims related to Hurricanes Harvey, Irma and Maria of US$700 million
XL Group reports P&C combined ratio of 94.8% for Q4 2016