Industry’s return on equity sky-high in 2021

At 18%, the industry’s return on equity was sky-high for the first three quarters of 2021, but industry observers warn this could be cut in half in two years.

While these high profits have reduced solvency risk for most insurers, it’s not all sunshine and rainbows. Property and Casualty Insurance Compensation Corporation (PACICC’s) CEO tells the industry to heed caution.

“Every single time that insurers have reported such above-average profits, competitive forces have quickly acted to cut the industry’s return on equity in half—to an average of 7.4% —within two years,” President and CEO Alister Campbell writes in PACICC’s annual report.

“In the past, such high levels of profitability have proven not to be sustainable,” PACICC’s board chairman Glenn Gibson writes. “Over the past 45 years, P&C insurers have reported return on equity of greater than 15% on 10 occasions.” 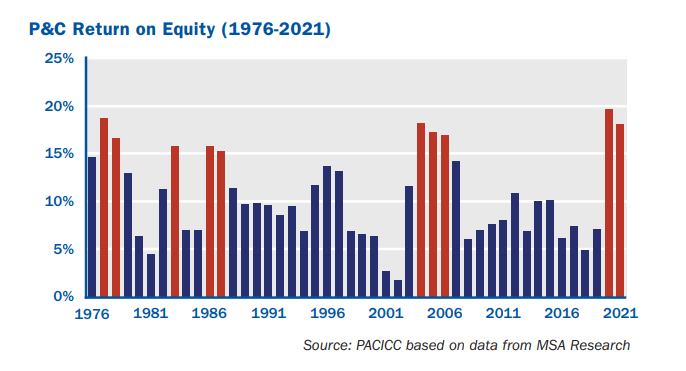 Gibson notes that auto and commercial lines had a particularly strong underwriting performance in 2021 — a key reason for the industry’s profitable results. And PACICC’s members saw loss ratios at profitable levels in every major line of coverage.

Campbell writes the “good news” is these profits have resulted in improving capital test scores for most insurers.

In terms of solvency, no Canadian insurers failed for the 18th consecutive year. This is not uncommon for the industry.

Gibson notes PACICC primarily sees the failure of smaller, regional insurers, but “the increased pace of consolidation means that the next failure is more likely to be that of a medium-sized or even larger insurer, which places new pressures on our current operating model.”

This led to PACICC’s seeking members’ feedback on the merits of purchasing reinsurance to ensure a more efficient and cost-effective response to future industry solvencies. Gibson says PACICC will be reviewing the results in June.