Farmers across Canada are being buffeted by a mix of drought conditions and hail damage in June and July, but insurers may be able to increase farmers’ risk management through drought and hail outlooks, experts explain.

On the opposite hand, some parts of western Canada are experiencing light to medium hail damage after recent storms. The Canadian Crop Hail Association (CCHA) says they are currently investigating more than 1,450 claims between June 25 and July 2.

This follows a major increase in 2021 of crop hail loss, Scott McQueen, chairman of CCHA and chief operating officer at Palliser Insurance, said during a CatIQ Connect session in June.

“In 2021, we as an association had 11,700 claims total for crop hail claims, and we produced a loss ratio of over 100%,” McQueen said. “[Across] Saskatchewan, Alberta, Manitoba, we took in about $325 million in hail premium and we paid out substantially more than that. In Saskatchewan, we took in about $167 million in premium, and we had $225 million worth of payments going out.”

Luckily, farmers seem proactive when it comes to protecting their crops. 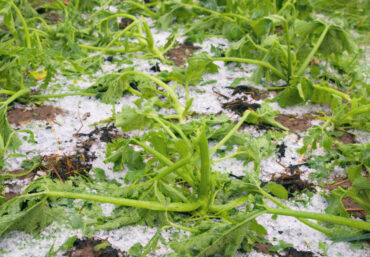 However, adverse weather like hail, dry winters or heat domes can also cause worsening drought events in a subsequent year, one expert said.

“We can have flash droughts, unfortunately, that come on very quickly, so they aren’t anticipated easily at all,” said Elaine Wheaton, adjunct professor and emeritus researcher at University of Saskatchewan. “But the other types of droughts are creeping droughts, especially if we see a very dry winter; winter…that’s a strong indicator of increasing likelihood of drought.”

On the plus side, these indicators can be used to improve drought outlooks and, in turn, risk management, Wheaton said.

Further to that, crops impacted heavily by hail in a given year can make them vulnerable to weaker weather events the following year.

“Usually crops can rebound, they regrow,” said McQueen. “Canola [a major crop in western Canada] will produce a large canopy and almost protect each other. Big, bushy potted canola will protect the lower portion of crops.” But when the top canopy of plants is battered, it leaves the lower portions vulnerable in subsequent years.

Given the year-after-year impact that hail can have on crops, will multi-year insurance policies be developed?

“We’re always looking to round out our product for a multi-year price. Right now in our space, we’re highly regulated so it’s a year-over-year price,” said McQueen. “At this time, [multi-year policies] don’t come into play, but it’s definitely something that we’re basically researching every single year to try and find products and help for our producers to help them with their risk management going forward.”