‘‘Hey Google, get me a car insurance quote.” 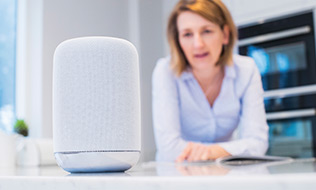 For decades—longer than this writer’s lifetime—science fiction films have predicted a world with talking computers.

First there was Robby the Robot in Forbidden Planet. Then, before you knew it, machines that could talk were commonplace in sci-fi, from HAL in 2001: A Space Odyssey to the talking computer—known simply as “Computer”—in various iterations of Star Trek.

Now, at long last, we are finally living in a world with real, honest-to-goodness talking computers. What was once science fiction has become science fact, and a glorious achievement for humankind.

We’ve not only had the ability to talk to our smartphones for years, but we’ve now got smart speakers in our homes, with the recent arrivals of Google Home and Amazon Alexa in Canada.

Thanks to these devices, many of life’s inconveniences are now things of the past.

Can’t be fussed to turn your lights on and off by hand? Don’t feel like getting up to change the temperature on your thermostat? Not willing to budge to turn your kettle on? Well, now Google Home can do all those things for you by following your voice commands (assuming you have the necessary connected devices, of course).

Early forecasts indicate that smart home speakers won’t just be a passing fad. Canalys predicts that global shipments of these devices will exceed 50 million this year, with Amazon and Google leading the pack.

That’s a lot of talking computers. And these days, they’re not just for playing music or reading the news—you can even use them to get insurance quotes.

The first to the table

Kanetix has been offering quotes through Google Home smart speakers since last summer. Currently, consumers can ask InsuranceHotline.com for auto quotes and RateSupermarket.ca for quotes on mortgage rates.

“What’s good about these smart speakers is they all have phone capabilities and they will connect you to the [insurance] provider,” explains Kanetix CEO Andrew Lo. “You can start talking to them from your smart speaker.”

As of press time, customers can’t purchase insurance through the devices—and that’s something Lo doesn’t see changing in the immediate future.

“It’s still really early days with regard to purchases,” he says. “I personally don’t use a smart home device to purchase my groceries or order a pizza.”

In December, Aviva became the first insurer in Canada to launch a “skill”—essentially an app—on Amazon Alexa, allowing consumers to ask Aviva questions about insurance.

“They’re saying that one third of all Canadians will own a smart home device within the next five years,” says Ryan Spinner, head of innovation for Aviva Canada. “We wanted to be really connected to what our customers are doing and how they’re living their lives, and integrate our products and services within our customers’ lifestyles.”

Right now, Aviva’s Alexa skill can explain insurance jargon to consumers. For instance, users can ask Aviva what a deductible is. The skill is also designed to offer auto insurance quotes to drivers in Ontario.

While Aviva doesn’t have immediate plans to expand the quoting tool to other provinces, the insurer says Amazon’s technology will make it easy to determine where the demand for smart speaker quoting exists.

“They’re saying that one third of all Canadians will own a smart home device within the next five years.”

Consumers can also use Aviva’s Alexa skill to help them find a broker.

Although the skill only hit the market in December, Aviva is already getting feedback on its performance from customers.

“We are receiving tons of feedback on social media from customers using the app,” Spinner says. “We take that feedback and basically in real time we’re able to improve and update the skills of the app moving forward.”

The idea of an insurer using smart home technology to offer quotes directly to consumers might sound scary to some brokers—but there’s no reason brokers themselves can’t get into the smart home game. Some already are.

Jeff Roy, the CEO of Excalibur Insurance, is currently working in collaboration with Tom Reid at Aviva Canada and Joseph D’Souza at ProNavigator, along with two other brokerages—iSure and Mitchell & Whale Insurance Brokers—on developing a smart speaker tool for brokers that will offer auto insurance quotes.

Roy says Excalibur plans to launch the tool on both Google Home and Amazon Alexa this year. He believes smart speaker offerings are just another way brokers can respond to evolving consumer expectations.

“It’s just one more arrow in our quiver to adapt to how clients want to do business,” he says. “Our user experience initiative is to give people a choice in how they roll with us, whether they want to call us, walk into the office, use our chatbot, get a quote on our website or talk to a smart speaker.”

Other brokerages—some of which may be in direct competition with Roy—will be able to purchase this platform once it’s fully developed and deploy it themselves. But Roy sees the implementation of this technology as a necessary step to ensure brokers stay relevant.

“We need more brokers to help each other out, help develop stuff and help push the industry forward so we can all survive,” he says. “I feel that brokers who are successful in the future will continue to add on and build these options into their experience, and that’s going to allow us to compete with the insurtechs.”

Other brokers are taking a wait-and-see approach when it comes to smart speaker technology.

“This has exploded in the States over the last year and it’s launching in Canada now, so a lot of analysts are saying this is going to be a big year for smart speakers,” says John McClelland, founder of Toronto-based brokerage miBroker.

“They’re calling it the battle for the side table— they’re envisioning these in every home,” he says. “So maybe we’ll see these in millions of Canadians’ homes and the voice interface will be very important for financial services.”

But, for the time being, McClelland says miBroker isn’t making plans to start offering quotes through smart home devices.

“They’re calling it the battle for the side table— they’re envisioning these in every home.”

“If this ends up being the biggest thing since smartphones, I think it’s something we’d have to seriously look at. Hopefully with a solid digital strategy and moving forward with some modern carrier connectivity, we’d be in a good position to do that if we wanted to,” he says. “But is it worth putting the effort into it if this just turns out to be a fad?”

McClelland notes that, once smartphones took off, many predicted apps would be a game-changer in the insurance industry. But that wasn’t necessarily the case.

“There are some really good solutions out there for self-service on apps, but the kind of glorified app that tells you how to file a claim and all that stuff—people weren’t downloading them,” he says. “Everyone kind of thought those were going to be the next big thing, and it didn’t really pan out that way. But if you look at how smartphones have changed how we’re interacting with customers, that did have a big impact on things.”

Looking to the future

It remains to be seen whether insurers—or brokers— will get to the point where they’re actually selling insurance through smart home speakers. For now, the ability to educate consumers will remain a key offering of the technology.

“Consumer education is a good thing at the end of the day, and [Aviva is] trying to do that in an innovative way, which is especially important for millennials,” McClelland says. “Millennials love to research a product before they buy it.”

Indeed, millennials could be the primary demographic the insurance industry ends up targeting through smart home speakers. According to eMarketer, the heaviest users of virtual assistants are people between the ages of 25 and 34.

It’s conceivable that millennials will turn to smart speakers for insurance quotes, but for the time being, Roy at Excalibur is taking a realistic approach to what the technology could mean for brokers.

“I don’t envision a lot of policies being sold in the first year,” he says. “But the fact that we’re learning, adapting and getting the experience now is awesome. We’re not waiting five years to get in the game—we’re actually getting in when everybody else is getting in.”

There may be flaws in the technology in its incipiency, he acknowledges, but that’s par for the course when it comes to new tech.

“A lot of the time, you try things and there’s no guarantee you’re going to be successful. But in life, you have wins and lessons,” he says. “It’s what you learn from what doesn’t work that builds the next thing, and eventually you get it.”

And, at some point in the not-too-distant future, who’s to say people won’t be using their smart speakers to buy insurance?