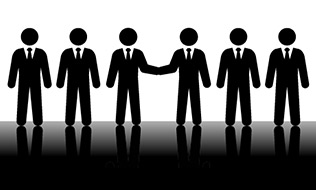 It’s been a helluva year for mergers and acquisitions in Canada.

According to Crosbie & Company, there were 716 M&A deals—valued at $63 billion—in the third quarter of 2017 alone, building solidly on the 724 deals worth $64 billion in the previous quarter.

The Toronto-based investment bank said the results (as of press time) marked the sixth consecutive quarter where activity increased year over year. In total, there were 2,211 deals, an 11% jump from the 1,992 in the first three quarters of 2016 (although the overall value of the transactions dropped).

Driving the increased interest in M&A, at least in part, is the growing number of private equity and pension fund deals, both on the buy side and sell side. According to PwC Canada, the average deal size rose by approximately 20% in 2017 for those deals with disclosed values. This reaffirms four key factors are at play: the market is highly competitive, bidding is aggressive, multiples are rising steadily, and, there is plenty of capital to invest.

Peace of mind may also be an increasingly important factor for both buyers and sellers. Making its way into the mainstream market is transaction liability insurance (TLI), which enables M&A players to more confidently allocate risk for a fixed cost. TLI, also known as transactional risk insurance, was originally a favourite tool of private equity firms but has become increasingly appealing to corporate buyers, especially in auction situations.

TLI growth has been tremendous, says Matthew Heinz, senior managing director with Aon Transaction Solutions in New York. “Our book has grown multiple times over the last five years. This is driven primarily by sellers wanting to exit deals with as much cash as possible.”

Here’s the context that makes TLI so attractive to both buyers and sellers. In any M&A deal, the goal of the seller is to limit exposure and receive the full purchase price at closing. Escrows and holdbacks are traditional options to reduce risk, but they can delay the sale and keep cash from being deposited.

Buyers, on the other hand, want to reduce risk and minimize liability. “Typically, a buyer wants to know and understand what they are buying,” says Edward Markovich, senior vice-president of transactional risk with Chubb in New York.

Due diligence is essential. Even so, risks may be overlooked, unknown or undervalued. They may also inadvertently or deliberately be misrepresented.

“Investors spend a lot of time, money and energy trying to get information from sellers about the company they are buying,” says Tim Allen, focus group leader and transaction liability underwriter with the Beazley Group in London, England. “Insurance protects them if that information is incorrect.”

There are three main types of transactional risk insurance.

The most common is known as representation and warranty insurance, or RWI, which protects buyers if misrepresentation or inaccurate information ends up costing the buyer money. This can involve problems with financial statements, intellectual property, taxes and legal violations.

“It runs the gamut of all operational aspects,” says Heinz. “It is geared to contractual terms in the acquisition agreement.

“The basic premise of the policy is breach of warranties,” he notes.

Insurance companies are stepping up in greater numbers to protect against such breaches.

“The insurance markets are now using their capital to insure against those risks,” Markovich says. “We only cover unknown unknowns, the unexpected.”

In some cases, for example, information is simply not known—a lawsuit that was not filed before the deal closed. In other cases, the insured weighs the risk of an issue escalating. An outstanding class action suit, for instance, may appear to all concerned to carry with it a small and reasonable price tag. Appearances, however, can be deceiving.

Those are acceptable risks, says Allen. “What we don’t do, because insurers don’t like to run into burning buildings, is take on all the risk. We can structure insurance around a specific issue and costs associated with losing a lawsuit.”

“Investors spend a lot of time, money and energy trying to get information from sellers about the company they are buying. Insurance protects them if that information is incorrect.”

The use of insurance to close deals, he adds, is about more than peace of mind. “Insurance takes the historic risk off the table. This enable buyers to focus on going forward.”

From an insurer’s perspective, there is little clients need to do over and above their standard due diligence. “There probably isn’t anything more you should do for an insurer that you wouldn’t already do to reassure your investment committee,” says Allen.

As the name implies, tax liability insurance provides protection for losses arising out of an uncertain tax position. Coverage includes taxes payable, interest and penalties, and gross-up amounts for tax due on insurance proceeds.

In “Transactional Risk Insurance in Canada,” a January 2016 article in Burnet, Duckworth & Palmer (BD&P) LLP’s publication, On Record, authors Brianna Guenther and Larissa Roche note that parties typically purchase TLI when the likelihood of a tax liability is low, but the potential amount of liability is substantial. Parties may also purchase TLI where tax authorities refuse to provide advance rulings on identified tax issues.

While most transactional liability insurance is focused on protecting parties from those issues and items that are not known at the time an agreement is inked, contingent liability insurance actually provides coverage for those issues and items that are known to the buyer and seller in advance: think everything from capping litigation exposure to successor liabilities. “Insurers will only issue a CLI policy where the risk is quantifiable, where a probability assessment is possible and where no moral hazard exists,” write Guenther and Roche.

Transactional liability insurance is not new—it’s been around for more than 20 years. What is new is its popularity.

“Over the last eight years, private equity participants realized there was a more efficient way to conduct deals,” Markovich says. “Insurance is ultimately cheaper than leaving money behind and provides buyers with protection for a longer period of time than what a seller would typically agree in an indemnity.”

There is also significant confidence in the TLI sector. The people behind the policies are experts. “You have to consider underwriters are former M&A lawyers. They formulated deals for a living,” notes Heinz.

Now the sector is specializing as insurers are getting more comfortable. Some carriers are underwriting specifically for health care, for example, notes Jason Stone, vice-president of Aon Transaction Solutions in Toronto. “The market has grown its appetite for [TLI].”

Canada has been slower to embrace the menu of opportunities presented by transactional liability insurance, although it is quickly catching up.

“Traditionally, most of the market hasn’t seen high volumes of Canadian deals being insured. Investment has been in other hubs,” says Allen. “I suspect, though, there would be a lot of M&A deals in Canada that could be insured.”

Comfort levels with the products have also been low, notes Stone. “Canada has been slower to the market due to the sophistication of some lawyers not understanding how the product worked.”

According to the Calgary-based law firm BD&P, there has been a significant increase in the Canadian market for transactional risk insurance in recent years. Estimates for 2014 indicate the amount of policy limits placed was $12 billion, compared to only $3 billion in 2012.

These M&A deals are also often huge. There were nine mega-deals—in excess of $1 billion—in Canada in the third quarter of last year alone. The largest announced transaction was the $22-billion acquisition of the U.S. electric utility Calpine Corporation by Energy Capital Partners and a consortium of investors led by Canada Pension Plan Investment Board and Access Industries. The second largest transaction of the quarter featured Hydro One Limited acquiring Avista Corporation for $6.7 billion in a deal that expands Hydro One into complementary and diversified regulated assets in the U.S. Pacific Northwest, including natural gas distribution.

The demand for TLI will likely grow as the use of this type of product becomes more entrenched. Insurance just makes sense, says Markovich. “It becomes part of the M&A landscape.

Indeed, notes Stone, for many U.S. deals it is expected transactional liability insurance will be used. “There is now a lot of private equity money flowing north from the U.S. These firms and their lawyers have come to expect these products.”

Notable mergers and acquisitions in 2017

2017 was a noteworthy year for M&A activity in Canada, with businesses involved in mergers and acquisitions totaling US$243.5 billion. Here’s a look at some of the year’s memorable deals.*

JANUARY: AltaGas announces it is acquiring U.S.-based WGL Holdings in a transaction valued at $8.7 billion.

FEBRUARY: Enersource Corporation merges with Horizon Utilities Corporation and PowerStream Inc., and acquires the previously merged entity of Hydro One Brampton Networks Inc. to form Alectra, a consolidated electricity distributor with a value of approximately $3 billion. This marks the largest amalgamation in the history of Ontario’s electricity sector.

MAY: Cenovus Energy Inc. buys a group of oil and gas assets from ConocoPhillips for US$13.2 billion, making it the largest transaction fully involving a Canadian firm in 2017.

MAY: A Macquarie Group–led consortium that includes B.C. Investment Management Corporation purchases a 50.4% interest in Australia’s Endeavor Energy for US$5.61 billion.

AUGUST: A consortium of investors led by the Canada Pension Plan Investment board in conjunction with Access Industries and Energy Capital Partners purchases American electricity generator Calpine Corporation for US$17 billion.

* All figures are in CAD unless otherwise noted