The perils of water: Flooding and mould top concerns for Canadians

MISSISSAUGA, ON, MARCH 24, 2022 – First Onsite Property Restoration, Canada’s leading property restoration company, marks the end of winter with the release of The Spring Melt, the first in a series of consumer surveys set to examine Canadians’ concerns, perceptions, and property readiness amid ever-changing weather patterns.

Conducted by Angus Reid Global on behalf of First Onsite, the survey of 1514 Canadian adults found that two thirds of people are concerned about the damage caused by severe rains and flooding (66%).

“As springtime approaches, one of the biggest threats to property is flooding and water damage,” said Jim Mandeville, Senior Project Manager, Large Loss North America, First Onsite Property Restoration. “Temperatures increase, snow transforms to rain, frozen ground thaws and river levels rise. Water and moisture can collect around the foundation of homes and businesses. The importance of being ready for these events increases every year.”

Flooding has accounted for 40 per cent of weather-related catastrophes in Canada since 1970 according to the Intergovernmental Panel on Climate Change’s latest report, The report lists the 2013 Calgary flood as the country’s most expensive flood ($1.8 billion in insurance losses and $6 billion in uninsured costs). These numbers do not include the 2021 calendar year, which saw southern B.C. hit with a torrent of floods, mudslides, and evacuations.

Drilling down, the survey also asked people’s flooding-related concerns, and mould stood out near the top of the list at 64 per cent. This is followed by the cost of major repairs, loss of valuables, safety, and insurance coverage.

Of note, after the historic 2021 Pacific Northwest floods that hammered southern BC, it is not a surprise the half of BC residents (48%) lose sleep over landslides and mudslides. Quebec is next, with 32 per cent concerned about landslides and unstable ground. In 2021 the province experienced a 1.8-kilometre-long landslide in northern Quebec, the province’s second largest in 150 years.

In terms of evacuation due to flooding, 44 per cent of Canadians feared having to leave their home or community, with B.C. leading the country (58%). See table below: 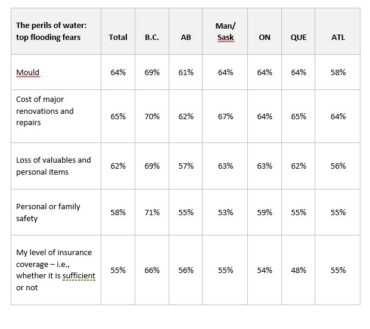 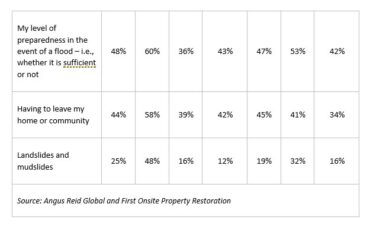 The Insurance Bureau of Canada reported that severe weather in 2021 caused $2.1 billion in insured damage and that “$2 billion is the new normal for yearly catastrophic losses – mostly due to water-related damage.”

“This increased occurrence of severe flooding is a constant driver for homeowners, businesses and communities to be more resilient and better prepared for tomorrow,” said Mandeville.

First Onsite offers homeowner and business tips  on preventing property water damage and protecting against the growth of mould and mildew.

In Canada, FIRST ONSITE has been on the frontlines of high-risk situations due to climate change, natural disasters, and weather-related events. It has been on site at some of the country’s most severe catastrophes such as the 2013 southern Alberta floods; the 2018 GTA (Greater Toronto Area) floods; the Slave Lake, Fort McMurray, and BC wildfires; the Goderich tornado; and Hurricane Sandy, to name a few.

About the Spring survey by First Onsite Property Restoration
From March 11 to March 14, 2022, an online survey was conducted among a representative sample of 1,514 Canadians who are members of the Angus Reid Forum. For comparison purposes, the sample plan would carry a margin of error of +/- 2.5 percentage points, 19 times out of 20. Discrepancies in or between totals are due to rounding.