VANCOUVER – Richard Bosma’s cows had been home for less than a week after an evacuation due to flooding in Abbotsford, B.C., before temperatures plummeted on his farm.

Bosma, who credits his faith with helping him remain resilient in a year that has seen record-breaking heat, flooding and now freezing temperatures, said a friend’s comment resonated with him.

“So which chapter of Revelations are we doing today?” he said, referring to the book of the Bible dedicated to apocalyptic prophecy.

Like many farmers in B.C., Bosma has faced a year unlike any other when it comes to extreme climate events.

With temperatures dipping to nearly -16 C in the normally temperate Fraser Valley last month, Bosma was not alone in dealing with frozen pipes and manure removal systems, snapping equipment and challenges getting workers to the site. One milk truck driver told Bosma it took 12 hours to get the milk lines on the vehicle thawed before he could start navigating icy roads to do his pickups.

But Bosma is wary of being perceived as a complainer, noting farmers aren’t alone in dealing with the cold that’s affected everyone from truckers to firefighters.

“It’s a bit of white-knuckling to make sure we get through the basics every day,” he said. 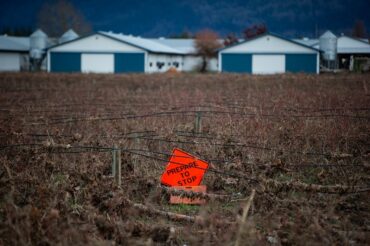 A traffic control sign that was carried by floodwaters onto a blueberry farm sits on the ground after the water receded, in Abbotsford, B.C., on Wednesday, December 1, 2021. THE CANADIAN PRESS/Darryl Dyck

Farmers also have a habit of supporting one another through difficult times, he added.

“My neighbour got hit just as hard with the flood. He’s out there plowing our driveway now,” he said.

Environment Canada warned of extreme cold in southern B.C. beginning in mid-December and continuing through this weekend, with another winter storm watch in effect.

“For many, this will be remembered as the year that climate change arrived on our doorsteps. Here in B.C., we faced record-setting droughts, heat waves and forest fires, floods and mudslides,” he said.

Stan Vander Waal, president of the B.C. Agriculture Council, said the recent cold snap has affected each farm differently depending on insulation and whether livestock was in a barn or outdoors. The cold tends to increase costs across the board, however, whether it means greater demand for more heating or additional feed for livestock that burn energy to stay warm.

Facilities damaged on the Sumas Prairie of Abbotsford in the floods may see worse effects from the freeze because of moisture in the structures, he said.

Given the number of extreme weather events this year, Vander Waal said he believes many farmers may consider increasing climate protections on their farms.

“When we look at the year in review, we’ve seen many extremes that we haven’t seen or many of us can remember,” Vander Waal said.

“Once you experience them one or two times, you start developing a strategy.”

Vander Waal owns Rainbow Greenhouses in Chilliwack, B.C. In his case, a strategy for coping with icy temperatures means ensuring thermal curtains are up to date, any leaks are sealed and construction is as energy efficient as possible.

Gagan Khakh, a third-generation vegetable and berry farmer at KBM Farms, said the family’s main property in Abbotsford remains seriously damaged after the floods. The basement of the housing for workers filled with 1.5 to 1.8 metres of water. The farm market, grading and packing equipment, and Khakh’s main residence were also all soaked.

The family considered itself lucky to have additional fields in Chilliwack, where they continued to harvest brussels sprouts until they started to freeze.

“With these recent cold temperatures we’ve had to stop completely,” he said.

“It sucks because it’s kind of like a double-whammy.” Khakh said the main way consumers can support B.C. farmers is to buy agricultural products from the region when possible.

He said he hopes 2022 brings some calmer conditions.

“We’re hoping that we just have a year that’s somewhat normal, that we get those timely rains, that it won’t get too cold, too early,” he said.

Gary Baars, another dairy farmer on Abbotsford’s Sumas Prairie, said the cold has hampered recovery efforts on his property, where the workers’ quarters are still “ripped apart.”

Baars said as challenging as it has been, it feels good to be back on his own farm. All 200 or so of his cows were affected by the evacuation during flooding and divided between five host farms until Dec. 22.