Behind the hard-hit condo insurance market in B.C. and Alberta

“There’s a lot more wood frame construction condos there rather than concrete, fire-resistant buildings that you’d see in Toronto, Montreal and places like that,” Peter Kennedy, Aon senior vice president and national director, real estate practice for Canada, says in an interview. “So, there is more wood frame, which tends to suffer more damage when there’s a loss.”

A lot of the province is also in a high-risk earthquake zone, and there’s been tremendous pricing and capacity restrictions placed on that, Kennedy says. More recently, flood and wildfire risks have increased as well, he adds.

Kennedy was responding to a question from Canadian Underwriter about why the B.C. and Alberta condo markets were particularly hard-hit. In November 2021, rate comparison site LowestRates.ca’s Home Insurance Price Index for the second quarter of 2021 noted that condo insurance rates jumped 22% and 10% in B.C. and Alberta, respectively, quarter-over-quarter. Canadian Underwriter has heard anecdotally that rate increases were often much higher than that.

In Alberta, NatCat losses also came to bear on buildings in the province. For example, Alberta saw the costliest hailstorm in Canadian history (about $1.3 billion in insured damage) in 2020 and the costliest-ever Canadian disaster — the Fort McMurray wildfire that cost about $4 billion to insurers. 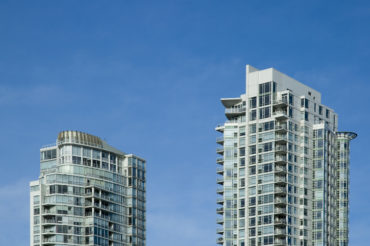 Increased construction material costs also contributed to an increase in premiums. In late spring 2021, Opta Information Intelligence reported that property reconstruction costs increased 6.4% year-over-year between May 2020 and May 2021. Lumber prices in particular skyrocketed, approaching a 400% increased from 2019 until mid-2021. “Clearly the inflationary costs in construction materials continues to be one of the reasons” for increasing premiums, Kennedy said. Although lumber costs dropped after last summer, they are creeping back up again.

Another trend Kennedy is seeing in the market, with deductibles and premiums increasing, is a renewed focus on loss prevention at condo/strata corporations. “It really is now in their real, direct interest to mitigate any losses or prevent any losses from happening.”

Due to high deductibles that come out of the condo corporation’s budget, many are now taking hard look at their building and investing in prevention. This can include things like water leak detection technology and general maintenance.

In B.C. and elsewhere, there have been bylaw changes to the definition of a standard strata unit to essentially the bare walls. That means the strata corporation policy only insures the structure of the building and is not insuring fixture elements in the units. “So that responsibility has been shifted to the condo unit owner to ensure things like the kitchen cabinets and appliances… as opposed to the corporation,” Kennedy says. These bylaw changes “obviously helps reduce pressure on the premium for the condo corp itself.”

Overall, condo insurance premiums appear to be stabilizing following years of premium and deductible increases. “You should see some flattening, maybe some tapering, in some insurance rates in this sector in the near future for most good risks and those with a better claims history,” Kennedy says.

Condo/strata risks not perceived as good can, but not necessarily, include: older buildings; those with poor maintenance; those situated in certain locations such as flood zones; and, buildings of inferior construction.

Higher rates and deductibles are here to stay, but not at the level they were several years ago. “Where it goes from here is a little bit of an unknown,” he added. “But certainly, the horrific premium rate and deductible changes that you’ve seen in the last couple of years are not going to happen in 2022, all things being equal.”